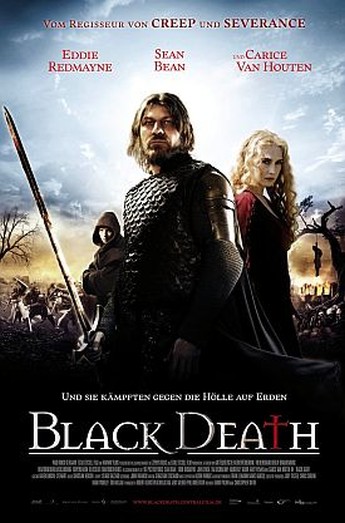 With the bubonic plague sweeping England, the country is in complete turmoil, the church blaming the wrath of God for the epidemic. Osmund (Redmayne) is torn between his duties as a monk, and his love for a woman, who has left town to avoid the plague. When bishop’s emissary Ulric (Bean) needs a guide for a mission that could reunite him with his love, Osmund volunteers for the job. However, the job is not without its risks, and they’re not limited to the threat of disease. Ulric and his band of merry men psychopaths are in search of a village that rumour says is untouched by the Black Death, overseen by a necromancer who can raise its victims from the ground in which they have been buried. They find the place, and the first part of the reports appear to be true. So, what about the rumors of the resurrected dead? Are those equally accurate?

Monty Python have a lot to answer for. Particularly early on, this seems like a serious remake of Holy Grail, with dead being brought out, chanting monks and even a witch-burning scene. My, did the quotes fly… After they enter the marsh where the village is located, things improve, as the film finally locates its own direction. It’s probably closer to a medieval version of The Wicker Man, with hints of The Deer Hunter, as it pits the soliders’ hardcore Christian faith against something more earthy and pagan – and neither side exactly comes out smelling of roses, showing little tolerance for those whose religious views may differ. The main mis-step might be in focusing on Osmund (despite the poster), as Redmayne has perhaps one-tenth the cinematic weight of Bean, who basically grabs all the audience’s attention everytime he’s on screen. We just don’t care too much what happens to the supposed “hero,” as he’s too much of a wuss – and that’s where this fails to reach the heights of Wicker. Still, it’s a solid slab of medieval grime ‘n’ gloom, as long as you resist the urge to start banging coconuts together.