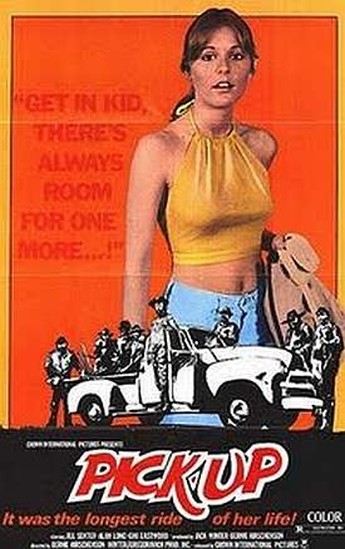 Two female hitch-hikers get a lift with young guy Chuck (Long), whose job is to drive a bus across Florida. As a result of a hurricane, they end up stuck way out in the middle of the Everglades, where… Well, let’s just say, things get a little weird. We get flashbacks depicting the contrasting first sexual experiences of both Carol (Senter) and Maureen (Eastwood). The former was an affectionate encounter with a boy her own age, while Maureen suffered molestation at the hands of a priest – and given this was made in 1975, a decade or so before such things became “fashionable”. The result has left her emotionally scarred and introverted, and apparently also pushed her away from conventional religion to become a worshipper of Apollo. At first, it’s Carol who gets Chuck’s attentions, but his attentions eventually shift to Maureen. And if you thought things were strange so far [and unless you do way too many drugs, the correct answer is “Yes, they were”], the final scene pulls the rug out from under everything that has gone before, and almost redeems the entire film.

Key word: “almost”. It’s less than eighty minutes, but for roughly the first seventy, you’re waiting for stuff to happen. As they get diverted into the middle of the swamps, it feels like it should be heading for 2000 Maniacs territory – or possibly something involving alligators. Yet once they get in there, it’s completely dull, except for occasional moments that border on the surreal, such as the arrival of a political candidate who solicits Maureen’s vote. Not that she bothers to ask him to send a tow-truck or anything. Curiously, none of the three leads, nor the director, were ever involved with a movie subsequent to this. Which is a little odd, as there’s credible amounts of talent there (just not on the scripting side), with the performances less irritating than might be expected given the material. That said, you could have had Gwyneth Paltrow, Christian Bale and Angelina Jolie in this, and it probably wouldn’t have helped.