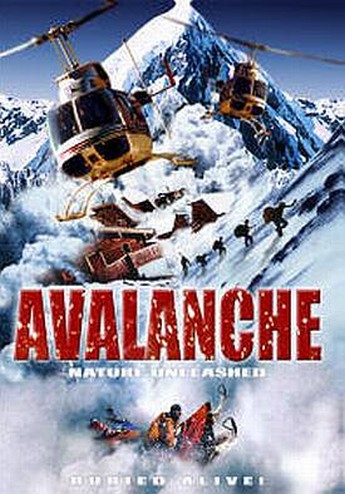 No-one will mistake this as great cinema, but given the title, you largely know what to expect: powdery, white stuff, in enough volume to keep even Kate Moss happy for a couple of hours. And, certainly, the film delivers there, mixing stock-footage and CGI to largely-decent effect – though this must be from the same people who brought us Raging Sharks, since the avalanches here roar in the same bizarre + inexplicable way as the sharks did there. This is about as close to ‘Jaws with snow’ as you can imagine, though director Roper is clearly no Spielberg. The plot is the title; standard, disaster-movie fodder, in which you can tick off cliches as they appear. Scientist warning of impending disaster? Check. Greedy businessman who won’t listen? Check. Brothers (smart/dumb) who eventually bond in a perilous situation? Check.

While entirely predictable, I confess the time passed while watching it quickly and painlessly; the performances are less annoying than you’d imagine, and most of the characters actually are… well, characters, rather than the walking cliches present in the script. Cassandra-like boffin Katya (Brooks) comes over best, but credit to all the actors for spinning straw into gold-plate at least. And even if some of the “ice” on view is obviously plastic, there’s enough going on between the avalanches of steadily-increasing size to keep you entertained. Indeed, with so many grudges and history, this occasionally feels like a soap-opera. Or a slope-opera, haha. Thank you, and remember to tip your wait-staff: I’ll be here all week…