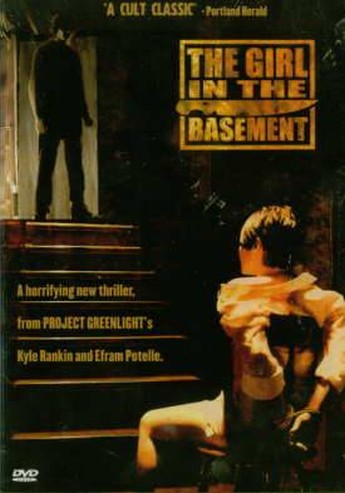 The sleeve proclaims this as, “A horrifying new thriller from Project Greenlight‘s Kyle Rankin and Efram Potello” – actually, it was made in 1996, way before Project Greenlight even existed. A lot of water under the bridge since then; heck, the actual director has been dead for six years, the unfortunate victim of a mugging. And since the film is not particularly horrifying or thrilling, the sentence is, hands-down, the loser of this week’s Truth in Advertising competition. That gripe aside, the film itself is okay, given its tiny budget (around $15K) and the makers’ relative inexperience. However, it’s just too bland in its approach to the subject matter. I mean, disturbed dishwasher Alec (Rankin) kidnaps a colleague (Skinner) from the restaurant where he works, and keeps her tied up in his basement? Where’s Anthony Wong when you need him?

This needs to be dark, brutal, psychologically disturbing, and for the most part, the script isn’t up to it, though the actors aren’t awful. Skinner is good, in a role which sees her cuffed to a chair for most of the movie, but Rankin’s distracting resemblance to Ben Affleck – and the film’s original title, Reindeer Games – may explain why he and co-writer Potelle won the second series of Project Greenlight. Such things will entertain you, probably more than the story, where very little happens of significance between minutes 20 and 80. There’s obviously a deep trauma in Alec’s past, and they stretch the depiction out right until the end, though it’s largely obvious. There’s only one moment that reaches the harrowing depths required here; the rest won’t stick in your mind for long.