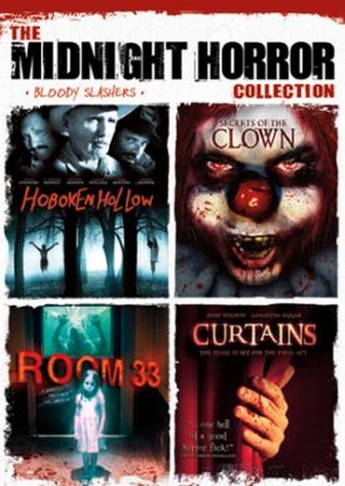 I stumbled across this box-set and another – which we’ll get to later – in K-mart for $5, and not having heard of any of the movies included, figured it was worth a shot. Further research showed the main reaction to the set can be summed up as “OMG, it has Curtains in it!” Turns out, that was receiving its first ever release on DVD, though the transfer here appears to be off videotape. It’s a matter of little or no concern to me, as noted, never having had the film cross my consciousness previously. But, hey, it’s nice to see a box-set that is at least pushing the boat out a bit; even some of Echo Bridge’s own packs end up being largely recycled product of one form or anither.

However, the main problem is that most of the film here simply aren’t very good, on any level. Curtains is the only one which could be described as interesting or memorable, and even that is likely one and done in terms of a viewing experience. For the price, you can’t really complain too much, I suppose, but in terms of lasting value, there’s precious little here worth even shelf-space. The bare-bones presentation and dubious-quality transfers complete an unimpressive package. 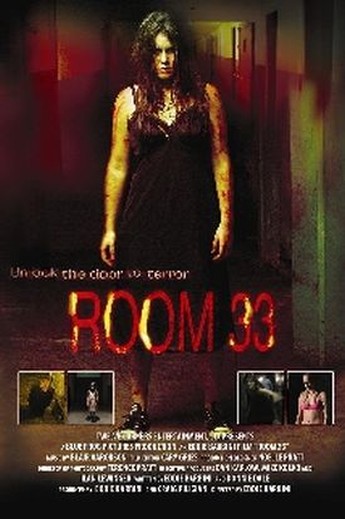 On their way to a bout in Portland, a roller-derby team plus their coach and equipment manager, pick up a couple whose car has gone off-road. However, a little further down the highway, the road is closed, and it turns out their van does not have enough gas to make it back to the last town. They find a driveway and follow it, hoping to find a house, but instead arrive an an abandoned state institution, where they decide to spend the night. However, Sarah (Hauser) is attacked by the shovel-wielding Roxy, who doesn’t have a great deal to say about the situation, but appears sufficiently disturbed as to freak the new arrivals out. Matters aren’t helped by the mysterious figure spotted roaming the asylum, or the tendencies of those, both in and outside the part, to end up with their eyes missing.

The set-up and initial introductions are actually well done, and kinda interesting – I haven’t seen a horror film with roller-derby chicks as the main protagonists before, and it’s a neat idea. Unfortunately, once the story arrives at the institution, it completely runs out of steam: it almost feels as if the location came first, with the makers then trying to come up with a plot that would wrap around it, and failing miserably. Instead, they have nothing to provide beyond a series of cliches, including that old standby. the faux cat attack, which I thought had been laughed out of the genre somewhere in the mid-80’s. The kills are badly-executed and/or off-screen, and the incredibly irritating Kevin Smith/Zach Galifianakis wannabe does not meet the fate he deeply deserves. The story doesn’t make much sense, and the further this goes on, the less you care about its pointless meanderings and the characters that initially showed such promise, become grating and annoying. You may end up gouging your own eyes out during this one. 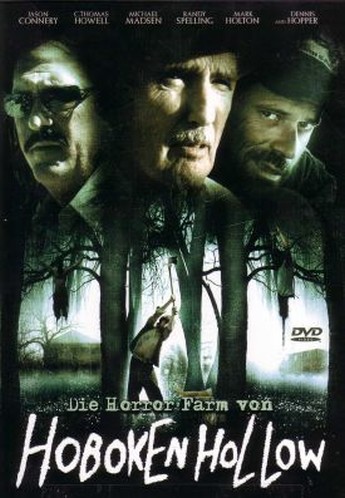 The main moral to be drawn from this is that not all star names are equal. The cast here is pretty stellar, given the film’s burial in this box-set. As well as Howell, also present are Lin Shaye, Michael Madsen, Robert Carradine and even Dennis Hopper, but the bang for the buck varies dramatically. Hopper and Madsen might be sponsored by AT&T, they’re phoning in their roles to such an extent; Shaye is her usual reliable self, but isn’t given enough to do. Surprisingly, it’s Howell who comes off best, sinking his teeth into a nice, meaty role – “ham” being the meat in question – as Clayton, the foreman of an evil Texas ranch owned by the evil Brodrick clan, who abduct transients, force them into slave labour, and hves a nice sideline selling jerky as well, if you get my drift. Falling into their hands is Trevor (Connery), a Desert Storm vet who is now a drifter, after his marriage broke up.

The problems are multiple, mostly with a script that tries to hold too many irons in the fire, and ends up burning its own fingers. Trevor, for example, spends most of the first half drifting, and there are multiple other subplots, which never go anywhere, petering out in the middle of the film, like the whole immigrant/ICE sidelight. The tone is incredibly uneven, swinging wildly from near-camp to borderline grindhouse, such as a nasty sexual assault, which is positively sleazy in atmosphere. Hopper plays the local sherriff and Madsen a dubious entrepreneur, who’s trying to get at some property owned by Ma Brodrick (Shaye), by getting Clayton to turn against his employers and spill the beans. Or something like that. But the bits here that makes sense aren’t very interesting, and the bits that are interesting – not many of those – don’t make sense. Howell’s performance is not enough to save this. 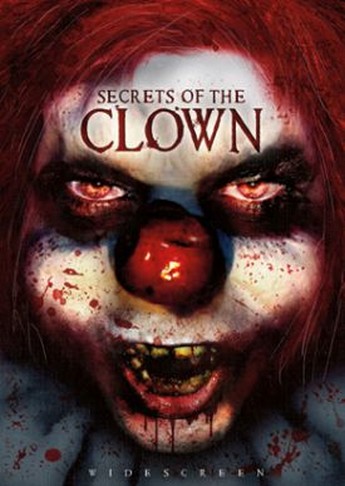 I knew we were in trouble, right from the opening scene depicting a night attack, which appears to take place in near-complete darkness. Whether this is the fault of the film-makers or the transfer is uncertain, but it plagued the film more or less throughout – any scene which did not take place in broad daylight is almost invisible, leaving the viewer struggling to figure out what’s going on. As near as I can make out, the plot circles around Bobbie (Pierro) and Val (Clevenger), a couple who have…issues. Val’s obsession with a clown doll, and the recent death of Bobbie’s friend under mysterious circumstances, with the doll found nearby. Since then, Bobbie has been increasingly plagued by nightmares and hallucinations involving the victim; to resolve the situation, he gathers his friends and a psychic (Kott), to try and contact the restless spirit, so they find out who was the murderer. No prizes for guessing how well that goes.

This is strictly bargain-basement fare, on just about every level, from the production values (as noted above, and also some pretty poor post-synch work on the audio), through the performances to effects whose execution is well short of the requirements of the plot. You can see what they’re trying to do, but the results look like offcuts from a Halloween party, though fractional credit is due for some enthusiastic use of corn syrup and food coloring and the director finding a friend willing to take her top off. But the core concepts, when revealed, turn out to be so ludicrous, and the script then adds multiple twists on top, which provoke fewer gasps of amazement at the revelations, as snorts of derision. Throw in the frantic over-acting by Kott, which is neither amusing nor entertaining, the long wait to get to the meat of the murder, where you have to sustain yourself on the no-so witty banter of Bobbie and his friends, and the use of a kitchen utensil as a weapon, purely so Bobbie can say, “You’re toast!” No. Just stop. Please. 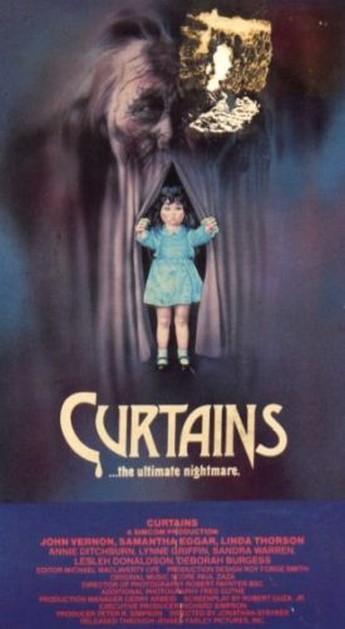 The pseudonym used for the director came about after a disagreement between the original helmer Ciupka and producer Simpson – the former left, and the latter shot additional scenes and completed the picture. Stryker is the name of the director of the film within the filn, played by Vernon. He is working on a new film, Audra, and has Samantha (Eggar) in mind for the role. The lead character is mentally disturbed, so to prepare, Samantha fakes insanity and is committed to an asylum. Stryker then pulls a switch, taking six other actresses whom he thinks might be better sutited, up to his home for a weekend’s casting call. Needless to say, Samantha is far from impressed by this, escapes from the hospital to confront Stryker about his deception. But has hanging out with the genuine loonies unhinged her, to the point where she’s responsible for the dead bodies, murdered by someone in a hag’s mask? Or is another of the actresses prepared to kill for the role?

Despite its Canadian origins, this feels a lot like a giallo, not least in a fairly-misogynist outlook. The victims are all women, and even before they’re killed, they’re basically used by Stryker as pawns for his pleasure. When he’s not actively bedding them, he’s making them re-enact “scenes” from the film, which probably should be retitled, “My Fantasies, Volume 3”. However, the decent performances from all involved help lift this up, and the one scene mentioned by just about everyone – on an ice-rink – is justly memorable. On the other hand, the stalk-and-slash finale is certainly over-extended, and the transfer is more than a little murky at some points, though not as bad as Secrets of the Clown. While I wouldn’t go as far as some, and call this an undiscovered classic, it’s by no means as terrible as some of its colleagues in the box-set, even for someone like me, who is not really a fan of the genre. For those who look upon slashers more kindly, this is likely worth tracking down.