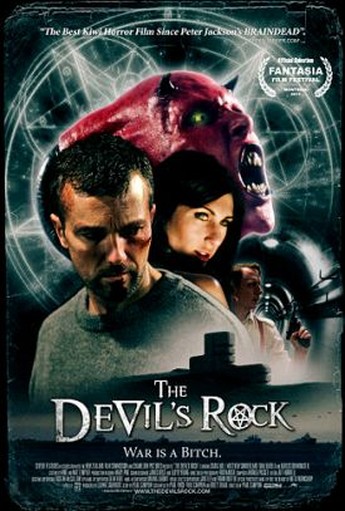 The night before D-day, two New Zealand commandos attack a German fortress in the occupied Channel Islands. Their mission is to spike the guns, helping convince the Nazis that the landings will come through there rather than Normandy. However, they hear a woman’s screams from the fort and one, Grogan (Hall) decides to investigate: his colleague, Tane (Drinkwater) is less keen. Deep inside the complex, they discover Colonel Klaus Meyer (Sunderland), who reveals they are what’s left of a Nazi attempt to unleash occult forces and win the war. There’s also a chained woman (Varela), who is the spitting image of Grogan’s supposedly-dead wife, but whom Meyer claims to be a demon – and there’s evidence he’s not lying. But who do you trust? The Nazi black magician, or the alleged hellspawn?

Good concept, well executed. That’s what you have here, the script keeping itself claustrophobically intense, with much of it involving three people and a couple of rooms – this also helps the film avoid over-reaching. There aren’t many effects, but what there are, are well-used and competently executed. The performances are what really sells this, and the actors are all convincing as their characters: Sunderland is particularly good as someone who realizes now he has gone too far, and now wants to stuff the genie back into the bottle. Varela, too, is charming and lethal by turns: I am just waiting for an (in)appropriate moment to use the line “Fuck you, hell-whore!” which the script manages to work in there. While there are some logic flaws – not much point in a diversionary action just a couple of hours before the actual landings – and an alternate DVD sleeve/poster which redefines “wildly inaccurate,” there’s nothing significant enough to divert from a solid, creepy small package.