It was with some trepidation that we settled in for this. We’ve seen enough American remakes of foreign movies to know that even the good ones are generally superfluous, tending more to copy strengths than address weaknesses. To be honest, that is largely the situation here. Yet, I’m happy to settle for a decent Chinese copy, which is respectful of the source and ends up being not all that far short of as good as the Japanese movies – if still not quite managing to capture the essence of the TV series. Much credit to Leung, especially considering this was his feature debut. If he isn’t Kaoru Kobayashi, he captures much the same quiet strength and firm compassion. He also knows that while the nameless man who runs the late-night restaurant may be at the core of the film, he isn’t what it’s about. 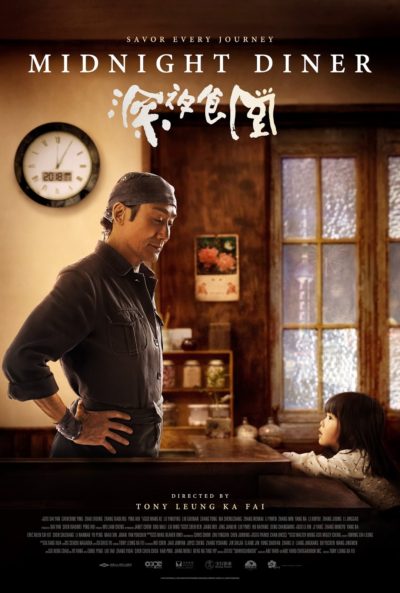 Indeed, in the early going, this felt like it could be capable of surpassing the Japanese movies, with a combination of lush cinematography capturing Shanghai at night, and some effective writing. The first section is particularly good, about a boxer (Yang), whose “horrible mother” is forever interfering in his life. I was hoping the film might break with tradition, and devote its full running-time to this story. It doesn’t, and the rest of the film struggles somewhat to recapture the early promise. There are moments: for example, we learn where Chef (as he’s called here, rather than Master) got the scar on his face, something which had always puzzled us. But there is also an unconvincing love story between two customers, one a taxi-driver, the other a wannabe model; and another segment even drops in that cliche, familiar from TV movies, of a random fatal illness. Really? Even though it’s handled as well as it could be, we expect better.

What it does nicely, is translate the characters into ones which are perhaps more appropriate to the Chinese setting. Rather than the Greek chorus of three salary ladies, we get a trio of young advertising types. Initially, they’re befuddled by the notion that a place exists which doesn’t have wifi; then they taste Chef’s cooking, and become regulars. I’d probably prefer to have learned more about them, or the old guy sitting next to the cop in the corner. This works best when it’s in the diner, and the further it strays from there, the more it becomes just another sappy romantic drama, without anything to separate it from all the other sappy romantic dramas. It’s still going to make you hungry – another difference we noticed is the copious amount of stir-frying done here, no doubt reflecting local tastes. But the preponderance of romance in the stories eventually causes this cinematic meal to become a bit overcooked. Just as the best food isn’t made from a single ingredient, a greater variety of flavors would probably have been a good thing, and left us wanting more.