The seedy underbelly of Victorian London has largely been done to death cinematically, mostly due to the sterling efforts of Mr. Jack T. Ripper. This self-consciously tries to go in a different direction, but makes too obvious a banner of its social justice aspirations. Communism! Feminism! Gay rights! There’s not a liberal touchstone left unworshipped, and as a result it ends up being less rather than more. 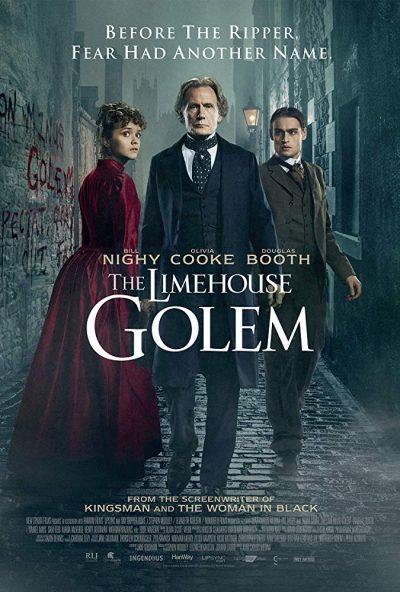 Inspector John Kildare (Nighy, replacing the late Alan Rickman) is assigned the titular case, of a serial killer committing brutal crimes in East London, a few years before the Ripper got going. It’s a bit of a poisoned pill, an unsolvable case given to a policeman about whom there are whispers, due to him not being “the marrying kind” (box ticked). Among the suspects is John Cree: unfortunately, he’s dead, with his wife Elizabeth (Cooke) having been charged with poisoning him. He was a playwright, she an actress, and if Kildare can prove John was the killer, Elizabeth can escape the gallows. However, there are other suspects to be investigated, including music-hall legend Dan Leno (Booth) and, for no reason at all I could see beyond political fanboyism, Karl Marx.

The procedural side of things is fine, with Nighy discovering the killer’s diary, scrawled in a book at the British Museum, and using that to narrow down the suspects. I particularly liked the way Medina depicted each of the suspects committing the crimes in turn, though the case against some is so flimsy as to be non-existent [it barely counts as a spoiler to say Marx doesn’t kill anybody. Unlike the political philosophy he invented]. The problem is the extended time devoted to Elizabeth’s background in flashback, which can can be summed up as “Men being unpleasant to her.” The glaringly obvious exceptions are not-the-marrying-kind Kildare, and Leno, who dresses as a woman for his act, so is clearly in touch with his feminine side. Everyone else? Complete bastards. We get the point.

More interesting is the glimpse into Victorian music-hall life, which appears considerably more rough and ready than I expected. Admittedly, this is based almost entirely on the genteel depiction of the medium from The Good Old Days. The version depicted here involves midgets, cross-dressing, community yelling and copious amounts of alcohol. Sounds like my idea of a good time, actually. There’s also some self-criticism, with the killer scrawling a message at one point, “He who observes spills no less blood than he who inflicts the blow.” While aimed at those who exploit murder for commercial ends – not least, Leno – it could certainly also apply to the film’s viewers. given the enthusiastic depiction of the crimes.

Unfortunately, rather than exploring this, the script seems keener on whacking us over the head with its morality, evident in clumsily misanthropic dialogue such as “My gender becomes inured to injustice,” or “The world is full of men like you… who feign generosity when what they really seek is congratulation.” Apparently, victim culture and identity politics were around 130 years before Tumbler. Who knew?