Helen (LeVierge) had a rather troubled start to life. Her mother was a hooker who became pregnant after being raped, and tried to kill her unborn child by stabbing it in her own womb. Mom died, but the kid survived, and 23 years later, is a reasonably stable and productive member of society, with a job as a bike courier in Toronto. However, injuries suffered in a road accident appear to have triggered something within her: blackouts, audio + visual hallucinations, and a generally disintegrating mindset. An MRI reveals a potential cause. Turns out she was originally a twin, but her other half was absorbed into Helen during pregnancy, and is present in her head in vestigial form. Surgery to remove the sibling remnants is scheduled. But she’s not going to go quietly, and Helen’s mental state becomes increasingly more disturbed and aggressive. 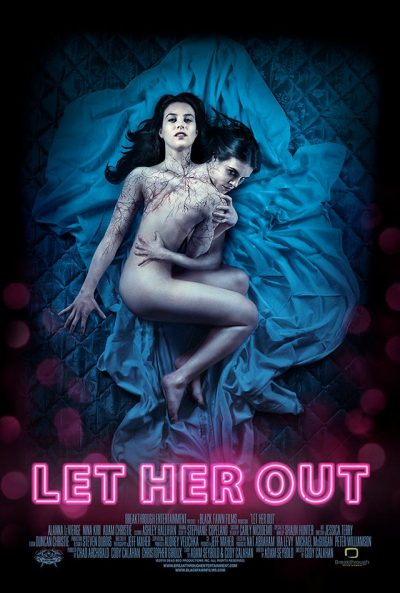 Vanishing twin syndrome is actually a thing, and is more common than you might think, occurring in up to one in eight multi-fetus pregnancies, often going entirely undetected. But I’m fairly sure it does not typically lead the survivor to wake up and find “I AM COMING” scrawled in blood on the walls. The audience is largely kept guessing as to whether or not there is anything going on here beyond the collapse of Helen’s sanity, up until the end, when the film delivers a grand-guignol conclusion which answers that question fairly definitively, I’d say. Not sure it’s particularly interesting, to sit and watch someone going insane: while LeVierge certainly gives it her contorted all, there is a certain point beyond which it all becomes a bit repetitive. Oh, look: another blood-drenched hallucination. It’s absolutely no surprise that the conclusion ends up back in the motel room where her mother was raped. I must admit, it looks impressively the same, considering 23 years have supposedly passed.

There’s a good helping of Cronenberg influence to be found in this Canadian production, particularly reflecting The Brood. Helen’s body rebels against her in a similar, uncontrollable way, though it’s less the result of unleashing suppressed emotions, and more genetic destiny manifesting itself. [In the debate about nature vs. nurture, this comes down firmly on the side of the former] Keeping the film grounded is Helen’s friend and actress flatmate, Molly (Kiri), who deserves some kind of award for going above and beyond, and sticking loyally by her pal, She goes well past the point at which I’d have been hitting “Unfriend” and making alternative living arrangements, especially considering her boyfriend (Christie) has the hots for Helen. He has clearly forgotten the proverb about not sticking your dick in crazy, and it’s never quite clear what the appeal of Helen’s alter ego is supposed to be, since we only see the psychotic aspects. If never much more than intermittently successful, proceedings are helped by the technical elements, in particular some effective, neon-drenched cinematography and an electronic  soundtrack that disintegrates along with the lead character’s mental health.