I suppose there’s something to be said for writing and making your own movie before you’re old enough to vote, as Bowling did here. But if all you can come up with is a shitty pastiche of movies which weren’t very good to begin with, you should probably stick to bitchiness and shoplifting like any normal teenage girl, rather than offering up pretentious interview quotes such as “I believe shooting film is the only way for a movie to have integrity.” This supposedly takes place one million years B.C., when a tribe of cavewomen under the control of of Neandra (Fideler) kill one of their tribe for having an affair with Neandra’s boyfriend, Rex (Kaelin). The corpse is found by the titular monster (Johnson), who falls in love with it – as you do – and wreaks a bloody trail of revenge against Neandra and the other prehistoric peaches. 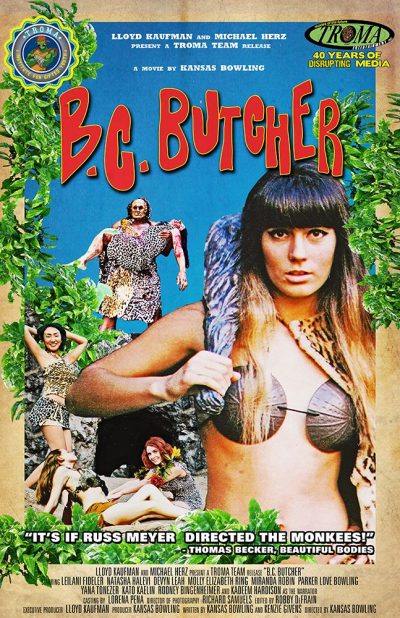 You will not be surprised to hear that Lloyd Kaufman was involved, which (along with the presence of Kaelin) suggests Ms. Bowling has contacts not normally available to a 17-year-old. That may be tied to a cameo by Bowling’s then-boyfriend, “Mayor of the Sunset Strip” Rodney Bingenheimer. He is literally four times her age, likely the most disturbing thing about the whole production. It’s clear Bowling has a love for vintage cult cinema from Eegah to Beach Blanket Bingo, yet appears to not have realized that a significant part of their appeal is their complete lack of self-awareness. Rehashing the awful aspects of these while, in effect, saying “Isn’t this funny?” – well, no, to be honest, it isn’t. Nor is throwing in a random music video segment by some no-name punk band in the middle.

It is the (relatively) subtler moments that actually work, such as Rex pausing to take a casual swig from a decidedly anachronistic plastic water bottle, or the plush toy which stands in for a ferocious wild beast. However, even at a less than feature length running time of 51 minutes, it likely outstays its welcome. I will admit its claim to be the first prehistoric slasher movie is likely accurate enough, even if the amount of actual slashing going on is low – after some early entail munching of the sacrificial victim, it’s closer to ‘cut away and them come back to a light sprinkling of blood.’And leopard-print fabric alone does not make for primeval: the film is badly in need of stop-motion dinosaurs, or something along those lines.

Credit to Bowling for going out and getting it done, certainly, and you get the feeling this was probably considerably more fun to make than to watch. For it proves, once more, that when you start with the deliberate intention of making a “cult” film, your efforts are almost inevitably doomed to fail. You’d be better off, in terms of entertainment, watching the films which inspired this, not least the original One Million Years B.C.