For the first half of this, I was wondering quite why tit was described as a Bollywood knock-off of Reservoir Dogs. Yeah, sure: it’s about a group of well-dressed men robbing a bank. But it borrows much more from… well, virtually every heist movie you’ve ever seen, and most obviously in terms of differences, goes into the backgrounds of the participants, something Dogs never bothered to do. Perhaps that’s a reflection of Indian morality: people who do bad things, must be shown to be doing them for good reason? Hence, you get the gang’s leader, the Major (Bachchan), who is raising funds for his sick wife. Or Marc (Shetty), who wants to get his girlfriend away from the sleazy club-owner where she’s working. 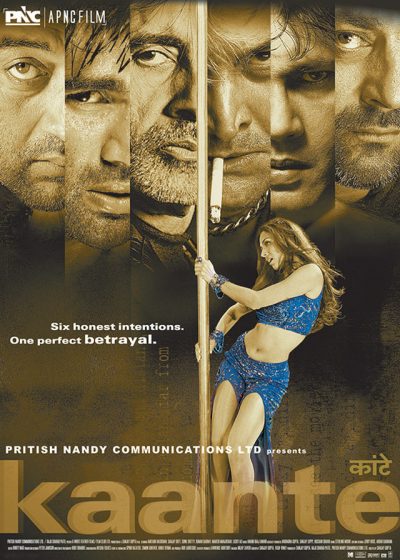 There is a twist, in that the entire film is set in Los Angeles, and the men all bear a grudge, because they feel they’re the victim of racial profiling – the gang first meet while being held at a local police station. As one points out, the Colombians have their cartels to provide protection for them, and the Chinese the triads – but Indians have no-one. There’s another interesting wrinkle, as they toss their gun supplier from a great height, because he makes a joke about his weapons being used in Kashmir. The rejoinder is, “Whatever an Indian might be, he never likes two things. One is, losing in cricket; and secondly, attacking our country.” Such laudable patriotism seems to affirm the underlying message that these are really good guys, as much the victims of circumstance as anything. The tag-line, “Six honest intentions, one perfect betrayal,” backs this up.

The last part of that indicates where the second half goes, and where the comparisons to Reservoir Dogs becomes overwhelming. If you’ve seen it, there will be no surprises here. For after the raid is interrupted by the police, the perpetrators go to a warehouse, and try to figure out who was the stool-pigeon. They’ve even kidnapped a cop, who’ll be tortured to reveal the source of their information. Sadly, the obvious opportunity to have this torture unfold as one of the statutory Bollywood dance numbers is spurned. While those happen, they’re more the result of the aforementioned girlfriend and the strip-club where she works. Though, of course, this being an Indian movie, it’s the closest thing to a G-rated strip-club you’ll ever see. [Fun fact: scream queen Tiffany Shepis turns up as “Stripper #4”; she actually alerted us to the existence of this movie, which is not even on her IMBb page. Maybe because she’s credited as “Tiffny”?]

Tarantino seems to have appreciated it, calling Kaante “fabulous” and saying it was among the best imitators he’s seen. High praise indeed, coming from a top-notch plagiarist himself (coughCityOnFirecough), but not an opinion with which I’d agree. At 152 minutes in its unedited form, this has severe problems with pacing, most painfully obvious in the shot where the gang are leaving the bank – it seems to take them forever just to walk down the steps. Outside of Bachchan, who can act in both Hindi and English, and provides equally intensity in both, the performances aren’t anything special; neither is the storyline (by which I mean, the bits not stolen from Dogs) very interesting. If you’re looking for an Indian knockoff – and there are plenty; I believe they’ve done at least three versions of Sleeping With the Enemy – you’d be better off with Koi…Mil Gaya.