After being thrown out of the house by her mother, Sarah (Pallett) is housed by the local council in Albion Court, a hellish tower block watched over by a sinister caretaker (Webber, who reminded me of Phil Davis for some reason!). Sarah is disturbed to discover that she has been placed in what the people next door cheerfully call the “murder flat” – though she’s assured it’s okay, because they didn’t actually die there… Things aren’t helped by an escalating series of events, such as one of her neighbors vanishing after he goes to fix the lights, then turning up dangling in the elevator shaft like a bloody Christmas decoration. There’s a creepy figure watching over things through CCTV, and the caretaker tells Sarah not to go up to the 25th floor. Meanwhile, a particularly perky resident decides it’s the perfect time to have a party. What could possibly go wrong? 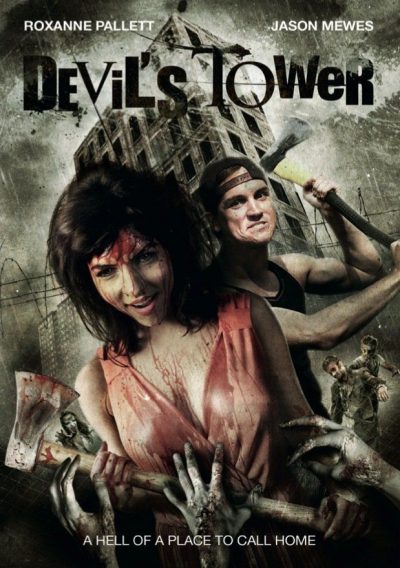 I can only presume Mewes knocked his role off while over in Britain with Kevin Smith on a “Jay and Silent Bob” tour. [If this was earlier in his career, I’d probably have inserted a snarky comment about it being to fund his heroin habit, but Mewes has been off that shit for five years, so good for him there]. His role as an American squatter seems utterly out of place, though it’s likely preferable to him attempting to suppress the accent. He shows up while burglarizing the heroine’s flat with his mate, yet ends up becoming one of the movie’s heroes once the zombie apocalypse starts. Oh, did I forget to mention that? For the last third of the film has the tower block’s inhabitants largely turning into the shambling dead. Sarah’s mother shows up too, and is apparently possessed by the spirit of the creepy figure.

Look, pick a damn theme and stick with it, will ya? For this bouncing around between ghost story, possession and zombies does none of the topics much service at all. The last, for example, just reminded me of the better alternatives in this sub-genre, particularly La Horde, and also Rammbock: Berlin Undead, though overall, the most obvious debt due here is to Attack the Block. This one is in desperate need of the makers committing to a topic, rather than trying to switch up in a clunky fashion. The film was Tooth’s feature directorial debut, and it shows, for it would take someone with rather more skill behind the camera, to be able to handle the shifts in tone between urban social drama, understated atmosphere and raw, in your face horror.

On the positive side, I didn’t mind the heroine too much, and there were some occasionally amusing moments of British sarcasm that helped liven things up. But if not entirely without merit, the middle section sags badly. My interest was severely taxed during the lengthy intermission between the characters being introduced and the overall situation established, and the point where the face-munching started up. Not one of the new wave of British horror that will stand the test of time.