“How can you go wrong with dinosaurs?”, they said. Well, the answer is much the same as to the question, “How can you go wrong with Godzilla?” By concentrating on largely uninteresting human characters instead of delivering inventive dino-mayhem, which is all we really care about. Now, it’s true that the original movie certainly took its own sweet time in getting to what Dr. Ian Malcolm subsequently referred to as “running and screaming.” But there, the dinosaurs were the big reveal, meaning build-up was required, and each new species thereafter was a delicious reveal. Now? We simply want dino-porn. Who really cares if this is Indominus rex, Velociraptor or – and this might be a spoiler – some human-crafted hybrid created as a dino-weapon. 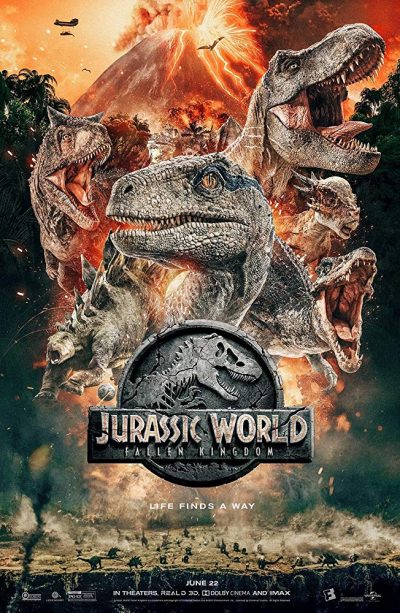 Memo to self. Any word sounds 72.7% cooler when you put “dino-” in front of it. [Looks around office] Dino-cup. Dino-chair. Dino-cat. Yep, case closed.

Based on vague memories of the dino-trailer, I thought this was mostly going to take place on the island, ending with the volcano going off.  Imagine my shock, therefore, when that is all taken care of in the first hour. The rescue mission run by Owen Grady (Pratt) and Claire Dearing (Howard) to rescue the reptiles from lava-laden doom kinda succeeds, except it turns out they were duped, and were simply providing Eli Mills (Spall) with a nice line of product for his dino-Ebay – ok, ok, I’ll stop. How dare he shamelessly exploit these animals for naked profit! That’s only allowed in the form of pseudo-educational theme parks. Uh, and movie franchises, I guess. Did I say that out loud?

Pratt is his usual affable self, and Howard slightly less irritating than last time. It’s the rest of the cast that are problematic, led in particular by Smith and Daniella Pineda as Nerds: The Next Generation. I was cheering on the Rex, Velociraptor or even praying the humans would trip and fall off a conveniently high surface. Anything to get them out of the movie. It doesn’t help that the film can hardly be described as epic in scope, once everyone, mammalian and reptilian, are off the island. The rest of the film then takes place in a poorly-lit country mansion, which had me wondering if Bayona had decided to remake The Orphanage, adding dinosaurs to the mix this time.

While its predecessor may have been no great shakes, it did at least have a couple of the necessary “Holy shit!” moments, genuinely new experiences which are required as dino-money shots (yeah, I lied) in this kind of thing. For example, the Mosasaurus leaping out of the water.  That turned me back into an 11-year-old again, with an almost complete collection of dinosaur trading cards. While the spectacles offered here are occasionally impressive – the volcanic eruption is well enough executed – it doesn’t have anything at all to stick in the mind that way. I guess $1.3 billion in box-office shows, the way to an audience’s heart, or at least their wallets, is through relentless dino-mediocrity.