Sometimes, a film does exactly what it says in the title. Not so often these days, when movies are often given obscurist titles: what the hell is Licorice Pizza anyway? This is the exact opposite. You see the name of the film, and immediately know whether or not you want to see it. You cannot be all ambivalent and “Well, I dunno…” about a title like The Incredible Shrinking Man. I remember seeing this when I was young, and what stuck in my mind were, in descending order: The Bit With The Spider; “There is no zero”; and The Bit With The Cat. You’ll notice these are all in the second half of the movie, and there’s good reason for that. The first half is rather more like The Incredible Guy Who’s Somewhat Insecure About His Height. 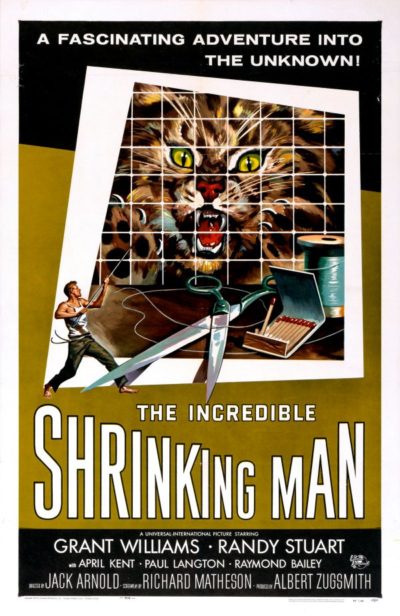 It doesn’t hang about, admittedly. Two minutes after we meet Scott Carey (Williams) and his wife Louise (Stuart) on their boat, he gets drenched in a mysterious mist, and the shrink is on. Oh, it begins with his clothes not fitting right, then progresses to his wedding ring falling off, and before you know it, he’s hanging out with loose, fake midgets like Clarice (Kent). There’s also a cameo by real midget, Billy Curtis, hero of The Terror of Tiny Town, which was nice. But there’s definitely a limit to the amusement to be had from watching a normal-sized man sitting on an over-sized sofa, and the film goes past it.

Wisely, they skip past all the shrinking from about three feet to six inches, with Scott living in a doll’s house. Until Louise leaves the door open, an unwanted visitor enters, and we get The Bit With The Cat. This ends with Scott being knocked down to the basement, where things really get interesting. It’s effectively a whole different planet, with our hero having to scavenge to survive. This involves things like fabricating grappling hooks to climb up for some cake. As Chris mentioned, maybe he could have used this approach to… climb out of the damn basement? Just a thought. Then there’s the increasingly large – relatively speaking – threat of the tarantula in the corner. [Brief moment of silence to honour the 24 spiders who died during production, according to Wikipedia]

The special effects are a bit of a mixed bag, sixty years later. There are times when it’s obviously a composite of the actor running, with a low shot of the floor. However, the model work in the basement remains very effective, and overall, it’s quite easy to buy into his struggles. The ending is rather downbeat: it’s more like Scott has passed through the five stages of grief and come to accept his situation: “My fears melted away. And in their place came acceptance. All this vast majesty of creation, it had to mean something. And then I meant something, too. Yes, smaller than the smallest, I meant something, too. To God, there is no zero. I still exist!” It’s an ending which is more philosophical and thoughtful than you’d expect from the title.