I am a loyal cinephile. If you’re involved with one of my all-time favourites, whether as actor or director, I’m yours for life, and will watch more or less anything else of yours. This is a bit of a double-edged sword. Rutger Hauer, for example, has been involved in his fair share of films that, shall we say, fall just a little short of Blade Runner. I know, because I’ve seen a lot of them. I still keep going, hoping for another Hitcher or Hobo With a Shotgun, rather than Omega Doom. 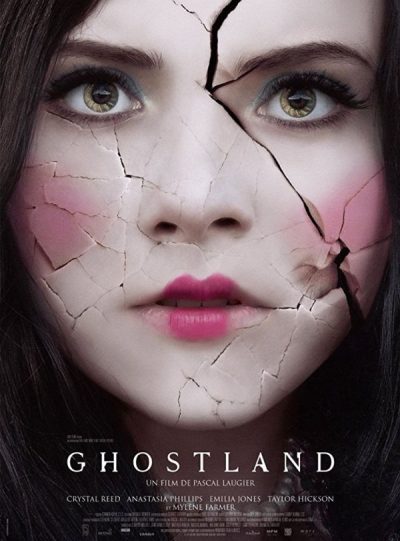 Laugier was responsible for Martyrs, which for my money was probably the most disturbing movie of the noughties. That will get you a lot of points on your account with me, and even if his next feature, The Tall Man, was underwhelming, I was still excited by the prospect of another film by him. This is… something of a return, both in content and approach, toward Martyrs: if not as unrelentingly twisted, it certainly has its moments.

Single mom Pauline Keller (Farmer) brings her teenage daughters to a remote house she just inherited from her aunt. It’s an almost cliched degree of creepy, to the delight of Beth (Jones), a wannabe horror writer: Lovecraft is her idol. Considerably less enthusiastic is her more normal sister, Vera (Hickson), and her doubts are well-founded. Barely have they settled in, when the family are the victims of a horrific attack, for no apparent reason, by two psychos in a candy truck [which reminded me of Berkshire County].

Fast forward a decade and a half: Beth (now played by Crystal Reed) is a well-known author, though her sister (now Anastasia Phillips) was badly traumatized by the ordeal, and still lives in the same house. When Beth returns for a visit, she discovers the nightmare might not be over.

Or maybe never took place at all.

Yep, it’s one of those films, where the viewer is left on the fence as to what, if anything, is happening in objective reality. I always find the, “And it was all a dream… or was it?” approach a bit of a cop-out. If the makers won’t commit to this, why should the watcher? Though I think I was finally clued in when old Howard Phillips himself showed up to chat to Beth for a bit. On the other hand, this makes for something more ambitious than the “psycho home invasion” this is at its core, and it deserves credit for this.

This also looks slick, and doesn’t let up, especially in the second half, which non-horror fans may find too unrelenting. I was left to wonder if the choice of Lovecraft – someone not infrequently accused of misogyny – was a deliberate self-referential comment, on a film which spends the majority of its running time putting the all-female protagonists through hell. And not just the characters; for Hickson is suing the producers over a disfiguring facial injury suffered during shooting. [Is it just me, or is the poster a tad tasteless, in light of that?]

If it’s no Martyrs, few films are ever likely to be. It’s still solid enough, and after the relative disappointment which was The Tall Man, gives Laugier a few more credits in his directorial account.