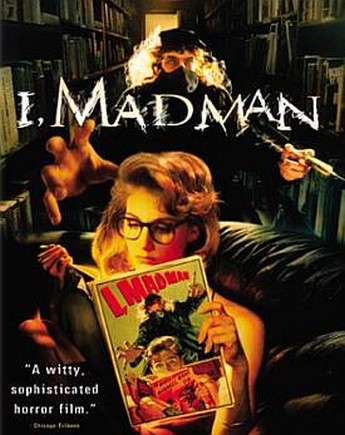 [2] Jenny Wright plays Virginia, a bookshop assistant who finds real life paralleling the book she’s reading. Which is unfortunate, since it tells the story of a psychopath who cuts his face off to prove his love for a girl, then goes round slaughtering people to rebuild it. Overall, this comes across as unsatisfactory, with plot-holes large enough to drive a truck through. For example, the heroine believes the next victim will be a librarian, so the police stake it out (her boyfriend’s a cop – handy, eh?). She takes the place of said librarian, who conveniently fainted just before going to lock-up… yet Virginia manages to find all the light switches, without being told where they are.

A minor point perhaps, though if even my gullibility was breached enough to notice, it can’t be all that minor! Occasionally some tension is built up by Takacs (who directed The Gate), only to be thrown away in a cliche. The idea is novel, and the make-up for the murderer is pretty startling – this isn’t enough to hold the film together as the blatantly semaphored storyline wends its way to a predictable climax and ending, which leaves all the interesting questions unresolved and answers only the dull ones.