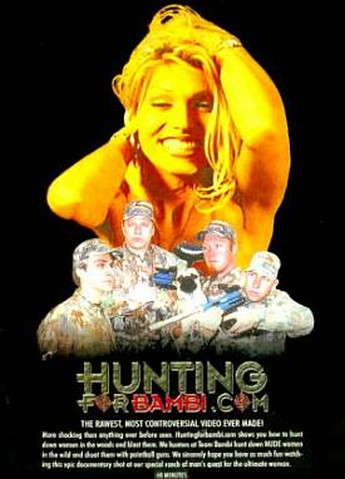 This became a minor Net sensation last July after a Las Vegas TV station, KLAS, reported with a straight-face that a company was offering the chance to “hunt” naked women with paintball guns. 15 minutes of fame later, it was revealed as a hoax, intended to promote sales of the video and other merchandise from their website – which, interestingly, now appears to be defunct. However, the tape is available through “reputable” outlets such as Amazon and Best Buy, so Burdick is no doubt laughing all the way to the bank. [I wonder, would the same outlets happily sell Hunting For Niggers or Hunting For Queers?]

For about ten minutes, the tape is an amusing parody of the outdoors-type shows often seen on cable TV, in which men drool over their “brave” long-distance kills [hey, I happily eat meat – I just don’t feel any need to rejoice in the slaughter]. Here, they lure their female targets by rustling hundred-dollar bills, and that’s ironic enough to be funny. Indeed, there’s one hunt, where the prey isn’t what they expect, that turns all expectation upside-down and is genuinely subversive.

However, imagination rapidly runs out, and it becomes, by turn, tedious, sleazy and ends up edging into creepy, as they taunt an injured “bambi” before “killing” her. Satire appears to evaporate entirely, and you get the nasty feeling the creators genuinely don’t think very much of women. I await the inevitable feminist backlash: Hunting For Pigs – even if directed by Andrea Dworkin, it still might be funnier…