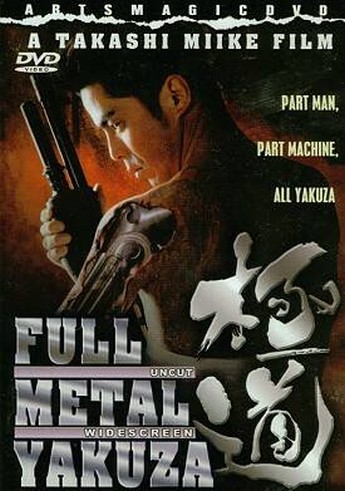 You rarely know what to expect from a Takashi Miike film: it might be good or bad, serious or absurd. About the only thing you can be sure of, is an interesting experience – this is his take on Robocop, inserting the concept into the world of Japanese gangsters. Low-ranking yakuza Kensuke (Ujiki) is killed along with his boss Tousa, then brought back by a Russian-speaking scientist (Taguchi). Or at least, his head is, the rest is cyborg, combined with the tattoes, heart and penis of Tousa. This might sound like Tetsuo, but Miike cares less for the psychological implications of the man-machine hybrid, than a roaring rampage of revenge, complete with arterial spray, and more than a touch of the bizarre.

Dating from 1997, this is a relatively early entry in Miike’s now-lengthy filmography. While you can see talent, and there are some typically excessive moments, imagination is stretched a bit thin, and its 103 minutes occasionally drag. In particular, the subplot involving the woman loved by both Tousa and Kensuke is a grind (Miike’s strong point is not romance), and few Westerners will know the gangster films he’s paying homage to and parodying. However, like all his work, if you don’t like this idea, there’ll be another along in a minute; the deadpan approach taken to the likes of Kensuke’s bulletproof defense stance, or his chain and bolt diet, makes them all the funnier. Credit also to Artsmagic for extras including a lengthy interview with Miike, as well as a commentary by author Tom Mes. I’m still working through the latter, and hope it’ll explain some of the more obscure moments. They’re probably references to one of the other films Miike made that week…