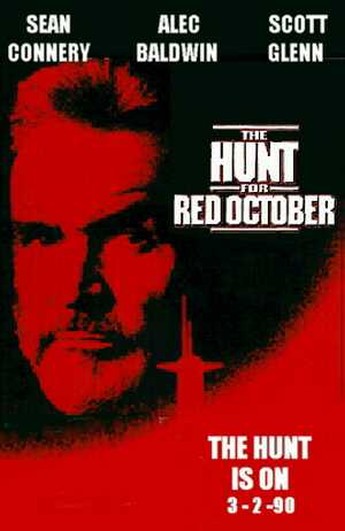 This film is like watching a chess match – you might be forgiven for raising an eyebrow and moving on, but what I mean, is that the movie works almost entirely without emotions. In this respect, it’s an “anti-chick flick”, a point emphasised by the presence of only one female speaking part, who vanishes inside two minutes, and the copious amounts of spiffy hardware on view: aircraft carriers, jet planes, torpedoes, and a sub with a cool new propulsion system that lets it sneak around unobserved. When the captain of the last-named (Connery) hightails it, alarms go off on both sides of the Iron Curtain, as motives on all sides are unclear. CIA operative Jack Ryan (Baldwin) must sort it out – to a background of sabres being loudly rattled.

Despite the lack of content for the heart, and the lack of a genuine central character (screen time being split almost equally between Baldwin and Connery), this is still supremely effective stuff, building to a gripping climax which pits sub against sub. This is partly because the script never strays far from plausibility; given the scenario and characters involved, it’s entirely likely how things would play out. Odd to have the Soviets starting off in Russian, then suddenly switch to English; given how uncomfortable sub second-in-command Neill looked, this is probably no bad thing!