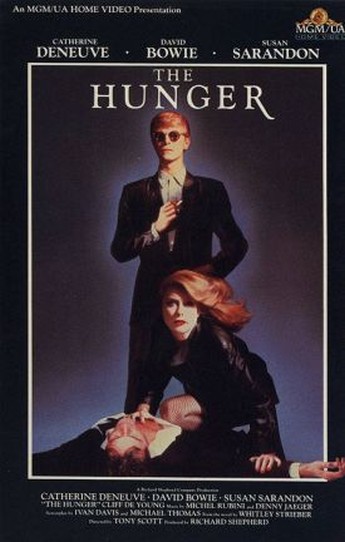 After the death of David Bowie, figured we’d dip back into the archives for one of his films, and Chris opted for this one – not sure if I’d ever seen this before. It’s surprisingly avant-garde and spiky; I was expecting something a great deal more mainstream. Yet, after the exquisitely eighties’ opening sequence, featuring Goth icons Bauhaus performing their anthem, Bela Lugosi’s Dead over the predation of vampire couple Miriam (Deneuve) and John (Bowie), it’s almost willfully uncommercial. After centuries of perfect youth, John suddenly starts to age, and visits longevity researcher Dr. Sarah Roberts (Sarandon); she thinks he’s a kook and by the time she realizes otherwise, it’s too late. For it turns out, only the original vampire – Mirima – stays young forever.

Anyone she infects gets a couple of centuries of apparent immortality, then it all catches up on them: eternal life, just not eternal youth. John is stashed, in the basement, with his predecessors as Miriam’s lovers, and she begins to work on Dr. Roberts as a replacement. Scott’s first Hollywood feature (he had made Loving Memory in the UK, back in 1971), this is quite some distance for the slick, crowd-pleasing approach shown in his next movie, Top Gun. The soundtrack combines slick classical and electronic noise with jarring, yet not ineffective, results, and there are times where it seems Scott is more concerned about atmosphere than showing or telling us what’s happening.

At first, it feels like it’s going to be Miriam and John’s story, but Bowie is unceremoniously shuffled off to one side after about half an hour (and some not entirely convincing Dick Smith make-up), and it switches to Miriam and Sarah instead. Based on a novel by future alien contactee proponent, Whitley Streiber, it feels like a vampire movie directed by an unholy alliance of David Cronenberg and Paul Verhoeven, simultaneously fascinated and repelled by the human body and, in particular, human sexuality. Probably needs more human warmth to connect with an audience, and its certainly much too obvious in its “sex = death” allusions, yet I’d still take this over Days of Thunder, any day.