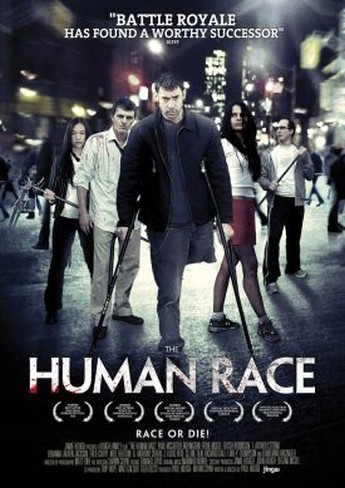 An entire block of 80 random people find themselves suddenly not where they were. They hear voices in their head explaining the rules. If they stray off the path, they die. If they don’t follow the arrows, they die. And if they are lapped twice… Yep, you guessed it: they die. Race or, at the risk of repeating myself, die. And as they soon discover, when the voice says “die”, it means “your head explodes like a Scanners marathon”. What the hell is going on? Can anyone figure it out before they become the sole survivor? The pure randomness of the selection means some are inevitably culled quickly: it’s likely not much of a spoiler, to say that neither the old geezer with the walking frame, nor the eight months pregnant lady make it to the end [though I was gratified to discover that the latter counted as two, if you’re keeping score at home].

Those who do make it include an ex-soldier (McGee), a former cyclist and a pair of deaf runners (Robinson + Cottam). Indeed, it’s particularly disabled-friendly, considering the first named of these has one leg, and it appears, would probably actually do quite well in an ass-kicking contest. Right up until a severly disapppointing ending, which appears to have strayed in from a rejected Star Trek episode, this is not doing too badly, with McGee giving a particularly personable performance. Nice to see him again, more than a decade after first being impressed with him in Drop Dead Roses.

The rest of the cast is a bit of a mixed bag: while the idea of having two actors communicate entirely in sign language is laudable, it’s weird how much we “norms” rely on voice inflection for emotion, and waving your limbs around enthusiastically doesn’t make up for this. I feel vaguely guilty at writing this, but it’s likely the same reason I have trouble sitting through silent movies, beyond the slapstick comedy genere. The other main issue is the film does drag a bit in the middle: once the concept is established, you’re left counting down the survivors from 70 to 5, without much further development. As noted, the ending had me rolling my eyes, but I guess it had to happen somehow. Seem to be saying this a lot lately: might have worked better as a short film.