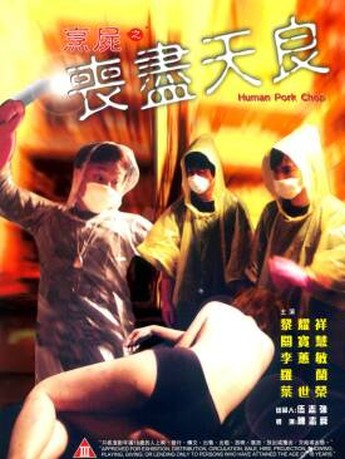 The first thing in the closing credits is the biggest “Any similarity to characters…” disclaimer I’ve ever seen. For in contrast to films which claim to be true but aren’t (TCM, Fargo), this Hong Kong movie is based on reality, but denies it. The generally-regarded as inferior There’s a Secret in My Soup covered the same case, but I won’t be checking it out; on the basis of this, a more depressing, grim and pointless viewing experience is hard to imagine. Grace owes her pimp money; when she can’t pay, he and his cronies kidnap and abuse her, culminating in death, dismemberment and her skull being hid inside a large plush toy [In the real murder, it was Hello Kitty; here, it’s a Kitty/Miffy cross; in Secret, any images of the doll were scratched out or digitally blurred. Sanrio were obviously not happy…]

It’s difficult to discern any purpose, beyond the obvious gross-out/endurance factor of watching a woman being made to eat excrement [cut – probably mercifully – on the DVD]. Credit to Kwan for enduring what cannot have been a fun shoot, but it’s difficult to sympathise hugely with a drug-addicted whore who tries to stiff Triad gangsters out of their money. Nor is there much insight into the mindset of those involved; from the sequence where they stuff a dog into a plastic bag and batter it repeatedly against a wall, it’s clear we are dealing with the differently sane. The film badly needs someone like Anthony Wong to give it a core; as is, it’s no more than an unpleasant freak-show.