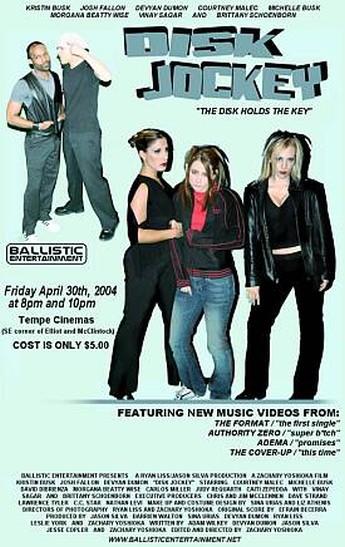 Ballistic have changed direction for their latest film, and it’s a wise move, the teen-angst genre having been mined for everything it had. This moves into action, with a central plot that is brisk, straightforward and effective: two killers (Dumon + Fallon) need to recover a disk which has incriminating details on their exploits. This has been implanted inside the torso of an unwitting carrier (Busk), and they aren’t the only people after it. Refreshingly free of pointless complexities or pretentious attempts at depth, it’s fast, frantic fun.

Indeed, the script is perhaps too sparse; at just an hour, it could do with development. For example, little is made of the point that one group after the disk is all-female, the other all-male – a ‘war of the sexes’ angle would be possible. My other criticism is the blend of dead serious and utterly goofball; individually, they largely work, but combining them is a challenge, and doesn’t come off here. [Though it rarely works, even in big-budget films, and Ballistic deserve credit for trying] More than once, dark, intense scenes are diluted by silly moments, or dialogue which feels like it was dug out of Tarantino’s waste-basket. Let’s face it, “criminals with verbal diarrhoea” have been done to death since Reservoir Dogs – here, it often comes over as cliched or irritating.

Dumon is the biggest culprit, and it’s a shame; the menace he projects is inversely proportional to how much he says. Fallon, meanwhile, was a late substitute: he bravely stepped up after the original actor broke a leg, and does okay, but you can tell his lines were written specifically for someone else. [Fallon also plays his original role, the brother of the carrier, who implanted the disk inside her, and does get the best line: “I’m gonna bring it all down, Titanic-style!”] The best performance is DiBrienza, the hood who sets things in motion; he has a Michael Madsen-like quality which is effective and convincing.

The film also persists in pulling you out of itself: characters talk to camera, call timeouts where everyone else freezes, and even refer to the running-time. It’s all very post-modern, but I find it hard to become absorbed by characters, with perpetual reminders that you are watching a movie. On the plus side, the gun work, particularly at the end, is excellent – remarkably, given the tiny budget, Ballistic even added digital muzzle flashes, and the tinkle of falling shells. Though I noticed that when one character was shot in the head, the entrance hole only appeared some time later… 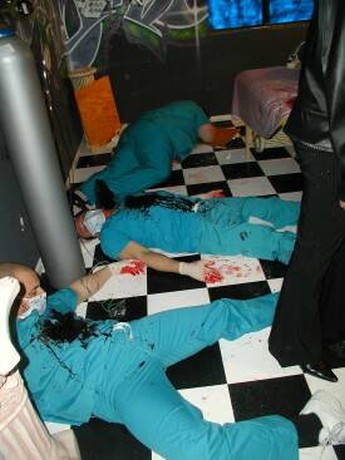 Proceedings all build to a satisfactorily messy showdown in a sleazy operating theatre, where the women are having the disk extracted, in order to sell it to the guys. [Though why didn’t they wait until after getting their hands on the goods, before arranging a meeting?] As a result, the mortality rate there rivals Hamlet, and the walls get a fresh coat of arterial-red – Jim told me that he and Chris spent 45 minutes mopping the room down after shooting had finished.

The weakest technical aspect remains sound: you’d think Ballistic would know by now not to record dialogue in a bathroom. It’s a particular problem given the wordy script, and they’d have been wise to bear this limitation in mind during writing. Talk may be cheap, but bad audio sinks a film faster than almost anything else. However, the camerawork is improved, not least because the addition of an El Mariachi-style wheelchair dolly allows tracking shots for the first time, and Efrain Becerra’s original score is a highlight once more.

For a film made on, effectively, zero budget, Ballistic continue to impress, and they have a wonderful willingness to adapt. The lower grade here doesn’t mean Synthetic Truth is necessarily “better” – indeed, for sheer entertainment, I’m less likely to pull it off the shelf and watch it – just that the sum of Jockey‘s parts, good and bad, don’t distinguish it adequately from similar movies I’ve watched. While different from their recent work, any casual trip to the video store will show the action genre is a lot more competitive than the teen-angst one: to create real impact, a work needs something special, an ‘X’ factor to make it stand out from the crowd. Unfortunately, Disk Jockey comes up just a tad short.

Some final praise: Ballistic’s attitude, that getting your art out and having it seen by any means necessary, is more important than making a profit, can only be commended as a refreshing change. And the trailer for DJ is not only the best they’ve done, it’s among the best I’ve ever seen. Yoshioka’s editorial skills are something on which any Hollywood studio should immediately pounce.