Five years after Carter’s debut feature, Dead Kansas, he resurfaced with something rather different. Rather than specifically aiming at the horror genre, this is an anthology movie with a little bit of everything. The wrap-around story is about two hitmen: the veteran Gio (Guerrero) and brash rookie Frankie (Pozos), who work for the enigmatic Mr. Kinski (veteran Novak – and a bonus point for the character name, natch). However, there is a rat in the organization, and Kinski believes it to be Frankie, so orders Gio to kill him. Gio asks for time, and is given an hour. As he tries to figure out what to do, sitting in the car with his colleague, they swap stories of incidents experienced or heard. [Yeah, it’s a bit like In Bruges]

This gets off to a bit of a ropey start, with Frankie’s performance rough around the edges, and a largely uninteresting first story. Valkyrie’s Bunker is about a supposed Nazi base in the Californian hills which five women (and, it appears, every graffiti tagger in the state) stumbled upon 70 years later. There’s just nothing to it, and provoked a severe “Is that it?” reaction at the end. The good news is, that’s the low point. Gio and Frankie’s chemistry begins to gel the more time we spend with them, and Assacre is simple, dumb fun about competitive eating and the titular pepper, which possesses a real kick to it. It’s filled with stupid, larger than life characters and is done with a self-aware energy that’s right for the material. 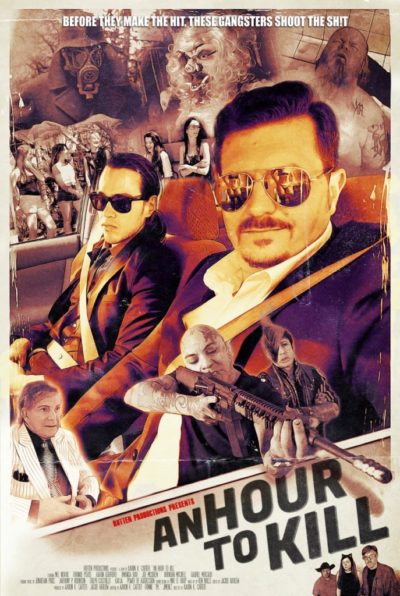 We finish with Hog Hunters, a story of bestiality, bowling and rural rape that put me off bacon for… well, several minutes at least [Yeah, who am I kidding: nothing could put me off bacon] It’s a little complex, and could potentially have been a whole feature on its own, to give the undeniably twisted concepts present, room for exploration. On the other hand, it’s likely here the lack of budget is most apparent. Things then wrap up with a resolution to the Frankie situation, and if I can’t say I was surprised, it does tie up all the loose ends rather nicely.

As with all anthologies, it’s a mixed bag, though is an improvement over Dead Kansas, in that all the performances are… well, “good” might be a stretch, but they do at least inhabit the same solar-system as genuine acting. Guerrero has to do most of the heavy lifting, dramatically, and acquits himself adequately. It does suffer from having somewhat of an uneven tone, in that the four components feel almost like they were spliced together from separate sources. Again, this is most apparent in the early going, and you should gradually get a better handle on what the intent is here. A sick and twisted version of Pulp Fiction made for no money, is perhaps the best way I can summarize it.

This and Dead Kansas are available on a double-bill DVD here.