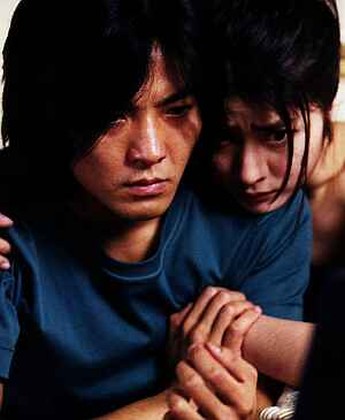 With Jackie Chan as a co-producer, Ma (who directed Chan’s First Strike and Rumble in the Bronx) builds on the international feel of those films with this globe-trotting tale in a sub-Bond movie mould. Tango (Ekin Cheng of Storm Riders), CS (Jordan Chan) and Blue (Kelly Chen) are a trio of former orphans from Hong Kong working for the CIA’s secret Lab 20 facility in Chicago, part of ‘Project VR Fighter’; a subliminal training regimen that turns desk clerks into field agents; but the funding is about to be cut off, until blond terrorist Alien (Gen-X Cops star Terence Yin) starts kidnapping experts in subliminals. Soon CS is on a revenge kick and Blue has been captured, so the two men undergo the VR process to take down Alien, despite the CIA’s orders otherwise.

This is enough plot for a Billy Blanks or Don ‘The Dragon’ Wilson version of the film, but then the key storyline is trumped as the VR indoctrination backfires and things between the friends go fatally wrong. Ma stitches together some pacey fight scenes and a neat chase via parafoils in Malaysia, but he’s in love with jump-cuts and cross-fades, and that gets wearing in the middle of the slower scenes. Also, in several places the look of the film seems inspired by production designer Rocco Matteo’s cool MTV-minimalist sets for the La Femme Nikita TV series, and it’s clear Hot War owes a debt to Besson’s original movie. Still, this hangs together well and keeps the energy up right until the finale; there’s also a cute gag where Alien notes that the Pokemon strobe-light seizure incident on Tokyo TV was just a test run of his riot-inducing subliminal messages.