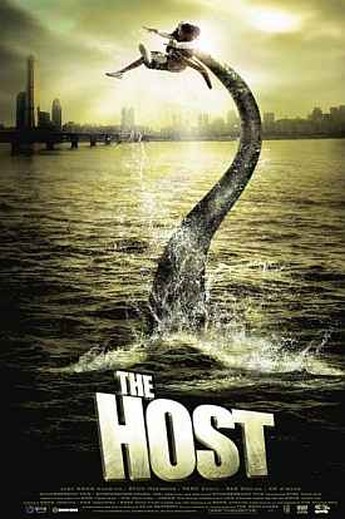 Disappointing. Despite being the biggest blockbuster in Korean cinema history, and possessing one of the coolest monsters I’ve ever seen, this is flaccid and overlong. It’s a poorly-written script, with characters we barely meet (for example, the entire background of the hero’s sister is that she’s good at archery), and threads which go absolutely nowhere, such as the virus that might not exist at all. It’s a great opening half-hour: a US military doctor orders chemicals to be disposed of by being dumped into the river Han. Six years later, this…thing emerges, pissed-off and hungry. It swallows the daughter of a guy who works at a riverside food-stand (Song), but when he gets a cellphone call from her, he realises she’s still alive and sets out, with his dysfunctional family, to rescue her.

However, the film falls apart in the middle; the central character spends most of the time in the hospital, and is replaced as the focus by his two siblings, about whom we know little and care less. The only bright moments are the daughter, trapped in the monster’s lair, and her efforts to escape, which have a genuine tautness. Otherwise, there’s what might be political commentary (the non-existent virus could be a nod to the non-existent WMD’s in Iraq) but it’s so obtuse and clumsy as to be meaningless to a Western audience. The finale unfolds exactly how you’d expect, especially given all the fuss about the sister being an archer. Sheesh. It may make more sense or have more impact in Korea, seen by an audience aware of different social dynamics. As a monster-mash, this doesn’t work very well; still it’s worth a look, simply for the creature. One can only hope it has a word with its agent and moves on to better things.