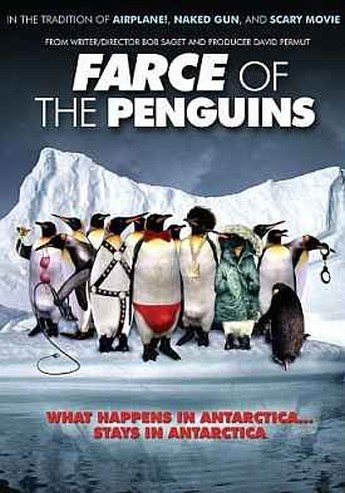 March of the Penguins. Happy Feet. Surf’s Up. Even Madagascar, a film not actually about them, featured our little flightless friends. You can’t go wrong with penguins, seems to be the mantra these days. Well…yes and no. There is something innately amusing about them, especially as they waddle across the ice. However, that is not, even with the best will in the world, enough to sustain a feature-length film, especially when you’re restricted to stock footage: they can’t surf, dance, hijack ships or perform any other of those cutely-endearing feats. And there is only so much waddling a man can take, even with a parade of guest voices that includes everyone from Alyson Hannigan to Whoopi Goldberg, and a story about two penguin buddies, one (Saget) sensitive, the other (Lewis) loud and obnoxious, heading for the mating grounds.

Saget is best known as the host of American’s Funniest Home Videos, and he did much the same thing there, adding ‘comedic’ voiceovers to other people’s footage. Here’s he’s unrestrained by the limits of television, though that’s mostly an excuse for bad language, or jokes about sex and farts. It’s a mixed bag, with some decent, if obvious laughs: you just know a reference to the “club scene” will lead to a baby seal punchline. The best moments are the most surreal: a Gilbert Gottfried-voiced penguin bickers with the narrator (Jackson); an arctic owl swoops in to hold a therapy session. Otherwise, however, while I’m fine with unquestionably, shamelessly low-brow, too much just isn’t funny. The good twenty minutes is buried by the other hour, which varies between dull and cringeworthily bad.