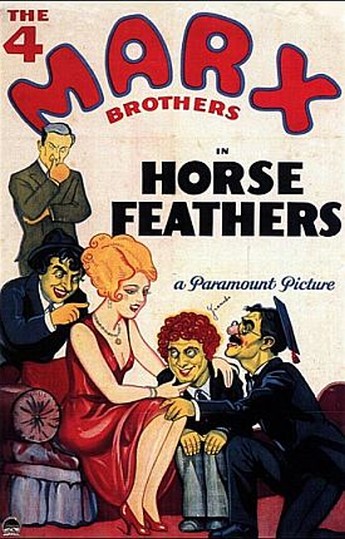 Another dip into the Mark Brothers pool, and this plays a lot better than Day at the Races. Clocking in at a breezy 68 minutes, it centers on a football game between Darwin and Huxley colleges, with the new Huxley president Quincy Adams Wagstaff (Groucho) trying to stack the decks with a couple of ringers. Unfortunately, the actual players available have already been hired by Darwin, and Wagstaff ends up with an iceman (Chico) and dog-catcher (Harpo) instead. And it doesn’t help that his son’s girlfriend, a “college widow,” (what they used to call women who stayed on after graduation, to find a husband), is actually working for the Darwin cause. It all ends in an extended sequence at the game, where things go from odd, to surreal, to insanity personified.

The phrase “Never a dull moment,” certainly describes this. It crams more into its brief running-time then many films half an hour longer, with a constant barrage of bad puns, sight gags and slapstick that barely pauses for breath. Even the occasional musical interludes are painless, despite Wagstaff’s remark, breaking the fourth wall: “I’ve got to stay here but there’s no reason why you folks shouldn’t go out into the lobby until this thing blows over.” It doesn’t all work, of course [time has destroyed some of the more topical references] – but if you aren’t amused by one joke, don’t worry, because there’ll be another along in about three seconds. I’m not normally a fan of pure cinematic comedy, but this is a straight shot of humour, no chaser, and still packs an appropriate wallop.