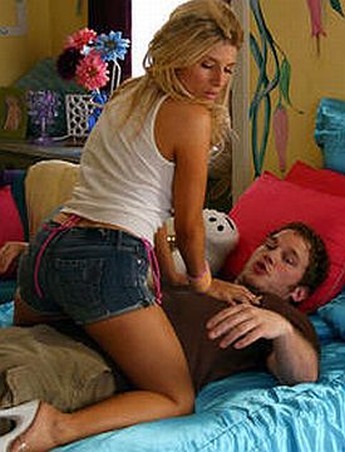 Stumbling across this on late-night cable, my first thought was that this was one of those soft-porn flicks. Two guys, Carl (Hines), who is strait-laced and married, and Lester (Pratt), who is definitely not either, find a magic video-booth that transports them to what can really only be described as an adult entertainment version of Pleasantville, where all your porno dreams come to life. For instance, there’s a sorority house full of nymphomaniac bisexuals, the polce force is entirely busty females, and no pizza delivery guy ever gets paid with actual money. Lester is in heaven; Carl less so, until he finds Bambi (Specter), far more the creature of his dreams than his shrewish wife. However, they are pursued through the pornutopia by Detective Rod Cannon (Caan) and his sadistic sidekick Suzi Diablo, though get cryptic help from the land’s overseer, Diamond Jim. Can our duo escape and find true happiness? Do they even want to?

My first thought: boy, Denise Richards and Tracy Morgan must be really hard-up. Both appear in minor roles here, the former as sorority house mother Autumn Bliss, the latter as rapper turned porn baron, Busta Nut. That said, I enjoyed this more that I should probably admit: it’s certainly a topic with plenty of scope for satire, and the two leads have a nice rapport. If you’re expecting actual sex, you should probably look elsewhere as, while there’s no shortage of pleasant eye-candy and certainly some breasts (at least, in the unrated edition), it never goes any further, and generally stays within the confines of a Maxim photo-shoot. However, it does fall into much the same hole as the material its parodying: the plot is basically rubbish, being completely predictable and unimaginative. That said, novelty and its tongue-in-cheek approach allow it to skate by, and you won’t find the time dragging much.