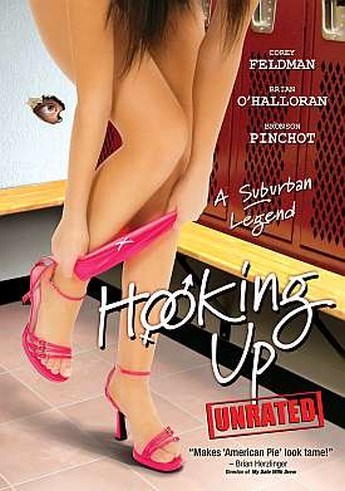 Moving rapidly on, it’s a remarkably bleak affair. The word “comedy” is used in the press release on more than one occasion, which I can only presume was some kind of typo, for this has a great deal more in common with the works of Larry Clark than the American Pie comparison touted on the sleeve. In fact, I’m trying to think if I laughed once. I don’t think I did – not even during the description of a particular type of sexual act known as “seagulling,” which I strongly suspect was fabricated entirely for the purpose of making an entry on urbandictionary.com.

Normally, I spend the first paragraph talking about the plot, but I’m forced out of my comfort zone by this film, since there is precious little story to speak of. It’s centered on three girls: the previously-mentioned oral sex slut, the virgin with the hots for a teacher, and the one going out with a 25-year old (Feldman – who is now actually approaching forty, which merely add to the sleaze factor). There are also three male pupils at the same school, who are all more or less desperate to get laid. For a week, various couplings and near-couplings occur. The film then ends.

Have any of the characters developed in any significant way? Doesn’t appear so. Have any life lessons been earned? Doubt it. Are a mob of viewers, who rented this expecting American Pie, preparing to storm their local video-store? Seems likely. There are a couple of veteran actors in this, who provide the acting highlights, but I won’t mention their names – trust me, it’s for the best. Finally, according to the IMDB, this movie was originally going to be titled Clusterfuck. Pity it wasn’t, because this review would then practically have written itself.