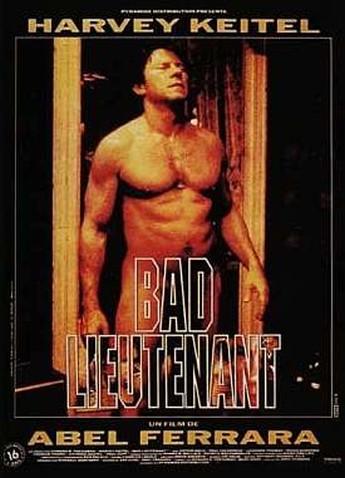 There are moments where we found ourself laughing at Keitel’s un-named cop, as he sinks into the depths of depravity, but it’s an awestruck kind of laughter, because you know you are watching a performance where there is absolutely nothing left in the locker. The title hardly does his character justice: he snorts coke off his daughter’s communion picture (just the tip of his substance abuse iceberg), steals drugs from crime scenes in order to sell them back to pushers, and pulls over underage girls for spurious reasons so that he can jerk off while standing outside their car. Yes, the word “bad” doesn’t even begin to describe him, and his downward spiral is accelerated by a gambling habit which is rapidly seeing him accumulate an unpayable mountain of debt to the sort of people, in whose debt you really don’t want to be. But then a window out of hell opens: a nun (Thorn) gets raped on the altar of her church, with a $50,000 reward being offered for the capture of those responsible. The victim knows who it was, but refuses to provide names, forgiving them their trespasses instead, which brings about a massive crisis of faith as well as in real life for the Lieutenant.

It’s a film ripe with religious symbolism and imagery: you can read the Lieutenant as a Christ figure, who has to go through his own version of the Passion, in order to reach salvation. This is apparent in things like the crucifixion-like pose he adopts, while staggering naked around his apartment, moaning gutturally to himself. It’s one of those moments where the reaction is to laugh, but it’s an uncomfortable, defensive chuckle, as Keitel literally and figuratively bears all. We’re gazing into the abyss which is a man bent on self-destruction. And it isn’t pretty, whether he’s shooting up in a grubby apartment with the rail-thin Zoe (co-writer Lund, a.k.a. Zoe Tamerlis, who’d die later in the nineties, with heroin addiction speculated as a factor), or staring lasciviously at the nun as she is swabbed, naked, on a hospital bed after the assault. The ending comes out of nowhere, yet, is somehow entirely appropriate, and Ferrara once again proves himself the master of depicting New York’s scuzzy underbelly.