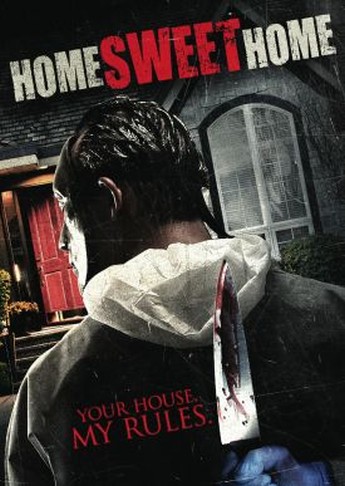 It takes some effort to screw up the home-invasion sub-genre as badly as this does it. I mean, you take a family, lob one or more psychopaths at them, and let battle commence. It’s basic stuff, but its beauty lies partly in the simplicity of the concept, as well as it’s universal relevance: everyone has a home, everyone has concerns about it being invaded. This, however… Sheesh, the biggest threat appears to be one of terminal boredom. It’s almost entirely a question of pacing: the first 20 minutes are concerned with the nameless perpetrator (Benson) setting up in the house of his victims, husband and wife Frank (MacDonald) and Sara (Heffern).

This is about four times as long as necessary, and twice as long as remotely interesting. And then, when they come home from their “date night”, and the mayhem commences, the killer then a) behaves with a degree of stupidity usually reserved for the victims in bad 80’s slashers, and b) does so at such a lugubrious pace, it’s like watching treacle be poured. Clearly, the idea is to project relentless inevitability. It instead projects a script with too few ideas to sustain the running time. This turgid lack of energy and intelligence extends to the heroine, who meanders round the storyline for what seems like ever, before suddenly remembering the handgun tucked away in a closet. Or when she gets a phone, doesn’t call emergency services, but opts instead to call the local sheriff’s office, which is closed. Was “911” too hard for her to remember?

About the only character here who shows any enthusiasm is the couple’s pet feline, who breaks out that old favourite of unimaginative horror, the old “cat jump” moment. What a refreshing throwback to concepts that had me rolling m eyes when I first encountered them, on VHS home-video. Indeed, that may be the only way this is bearable: to treat it as a nostalgic recreation of genre entries from thirty years ago, when audiences were happy to put up with any shit, for the sake of some actress nearing thirty pretending to be a cheerleader. Yep, that’s also a thing here. And I haven’t even got to an ending, which doesn’t so much insult the audience’s intelligence, as rip its head off and skull-fuck the eye-socket. There are a million and one better entries in this field: I strongly suggest you check them out ahead of this one.