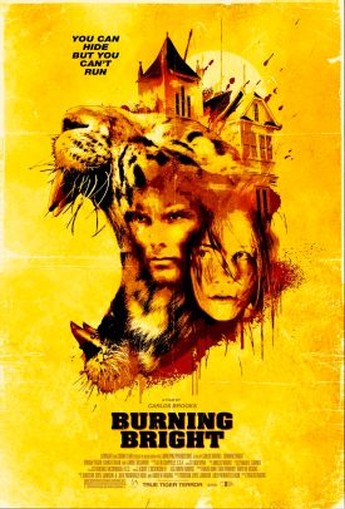 I can imagine the pitch meeting for this. “Hey, wouldn’t it be cool to have a woman trapped in a house with a tiger!” “Sure, but how did that happen.” “Who cares? With a tiger!” In this case, the “how” turns out to involve a proposed safari park, an evil stepfather (Dillahunt), a life-insurance policy and a hurricane. To call this contrived, would be putting it mildly. Then, throw in the fact that the heroine (Evigan) is given an autistic brother (Tahan) because… Well, nothing enhances drama and quiet creeping around, like having someone with no social skills or awareness of the situation, who is likely to burst into hysterics at the sight of the color red. And then there’s the way the tiger behaves entirely unlike a top predator – particularly one which, the plot carefully points out, has been starved, in order to show it who’s boss. It attacks only when dramatically necessary, and for the duration that’s appropriate, then… It stops. It’s not driven off. It just ceases attacking, for reasons known only to the scriptwriter and the tiger.

It’s what I call the Lost World flaw, after that film, where the T-Rexs did the same thing: show up, threaten the leads, then fail to push home their advantage, apparently forgetting what they were there to do i.e. munch on some crunchy humanity, instead drifting off to.. Oh, I dunno, binge-watch House of Cards or summat. That’s what we get here, time and time again. If you’ve ever seen a cat hunting a bird, you’ll know the hunter doesn’t give up until the bird is lunch or has flown away. You might get away with this nonsense if this was a dog (“Good wolfie, go chase the stick!”), but cats are impressively single-minded and relentless. Evigan does what she can (and does most of it in her underwear, in a manner I presume is paying tribute to Sigourney Weaver from Alien), but the script is just such utter rubbish, you’ll find yourself cheering for the hurricane. Because it’s likely the most intelligent and credible entity in the entire movie.