In the interests of full disclosure, I’ve been a fan since accidentally stumbling onto the show on Radio 4 in the late 1970’s. So I spent much of the movie quoting the dialogue along with the film – which was weird, this being the first time I’d seen it. But it also gives me different perspectives, because of the multiple version of the characters, first from the radio series, then the book, the record album and the TV show. [I never got far in the computer game, and didn’t bother with the stage show, comic book or towel]

And on the whole, I’m happy. It is, of course, significantly different, especially a second half that diverges severely from previous versions. Many of the best lines are, sadly, gone: “Oh yes, they were ‘on display’ – in the bottom of a locked filing cabinet stuck in a disused lavatory with a sign on the door saying ‘Beware of the leopard.'” And an entire subplot involving Zaphod Beeblebrox’s political rival, just evaporates half-way through. But what’s left captures the spirit of absurd satire very nicely, and with the exception of Mos Def (too bland as extra-terrestrial hitchhiker Ford Prefect), the cast make it stand up. Freeman is great as bemused Earthman Arthur Dent, and a special nod to Alan Rickman as Marvin, the paranoid android – no-one could have done it better. 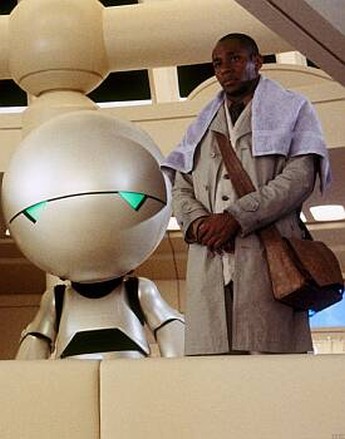 The other element that works is the visual side: things like the Vogons (there’s a lot of more of these galactic bureaucrats here) or the planet-building workshop in Magrathea, can now be seen in a way that does them justice. Imagination is nice, but a very large screen is usually better. On the downside, they build a love triangle between Zaphod, Arthur and fellow survivor, Trillian (Deschanel) that seems at odds with occasional moments which border on the homo-erotic. Get rid of all that, give us an explanation about why towels are so important, and we’d be much happier.

I have absolutely no idea how it will seem if you are unfamiliar with Adams’ work. Normally, our control subject would be son, Robert; unfortunately, in an almost unparalleled series of events, he actually read the book before seeing the film – so was contaminated and no longer viable. But if the new material is a guide, it should be fine, given genuinely funny moments such as the opening song, a great line from Simon Jones (the original Arthur Dent, now the recorded guardian of Magrathea) and a sequence involving wool that is beautifully surreal. It could certainly have been much, much worse.