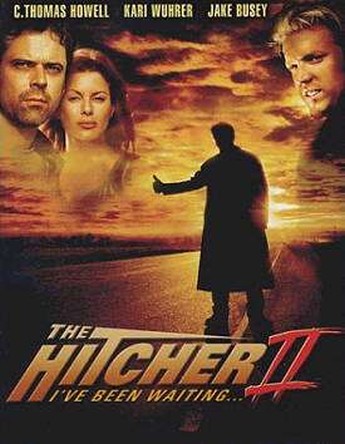 Since the original is an all-time favourite, I approached this with trepidation – Jake Busey is no Rutger Hauer, after all. Yet it’s actually better than you might expect. Howell is now a trigger-happy cop, still tormented by memories of his earlier experience. His wife (Wuhrer) makes him stop and pick up a hitch-hiker (Busey) in the Texas desert. He knows it’s a bad idea, we know it’s a bad idea – and lo, it is a bad idea, with the pair, almost exactly as before, framed for murder, and hunted both by the police and the hitcher.

There are a couple of interesting twists, at the start and just before half-way, but the main flaw is that the original covered the ground so well, there isn’t much room for improvement. If you’ve not seen it, however, or can push the memory to one side, this is no disaster, with Wuhrer in particular doing a nice turn from wife to avenging angel. They still don’t explain who the hitcher is; it’s suggested he’s the same guy as before, even though he’s grown younger in the interim. Would have been cool if Jake played Rutger’s son or something, they share a certain manic intensity. Nice to see a reprise of the Jennifer Jason Leigh taffy-pull, with a different victim (obviously!), but on the whole this is superfluous, albeit largely harmless. Expect Hitcher III in about 2018 – till then, I imagine C. Thomas Howell is pushing for Soul Man II.