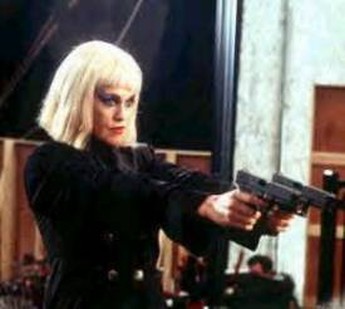 John Waters continues to mellow with age. This attack on the current state of motion pictures is mild as milk, as you’d expect from any studio picture. It’s like watching a little kitten play with a ball of wool, trying to be tough: the reaction is more likely to be “aw!” rather than “Ooh!”. Can’t argue with his targets – everything from Patch Adams to “family movies” – it’s the basically toothless way in which they are savaged that fails. Dorff plays a renegade movie director who captures starlet Griffith to use as his leading lady. Inevitably, she’s converted to their cause, an especial irony given that Waters regular Patty Hearst crops up in a cameo.

You can’t help but smile at some of the barbs, but they’re so inoffensively good-natured that you suspect even the victims would smile gently, pat Waters on the head, and tell him to run along and play. There are amusing ideas here, such as kung-fu fans coming to the rescue of the underground film-makers, and I also liked the way each of Dorff’s crew had the name of their favourite director tattoed on them, and reflected in their character. If this is never actually dull, it’s disappointingly pastel for a black comedy.