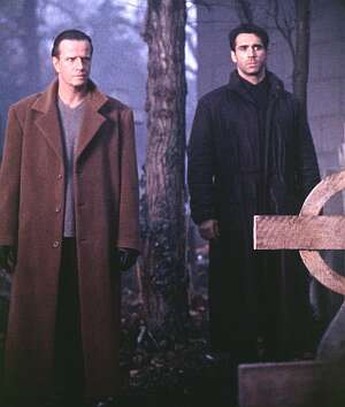 The perpetual reinvention of the Highlander mythos impresses me. Part II made no sense, part III pretended II never happened, and IV largely revolves around Lambert’s mother being burned for heresy, a fact no-one bothered to mention in the first. But on its own terms, Endgame is pretty good, largely thanks to Bruce Payne’s efforts as the bad guy, who is right up there with Clancy Brown’s original decapitator. Original immortal Lambert teams up with his TV-series brother Paul against Payne, who has assistance from good-girl-gone-bad Barbuscia and – a personal highlight – HK cinema star Donnie Yen. It all builds steadily towards a final fight in – at the risk of repeating myself – one of those deserted factories only found in action movies.

Regrettably, Paul has the charisma and screen presence of an undernourished pot-plant, but the rest of the cast do sterling work as the movie zips back and forth through time with a frequency and lack of purpose that might be irritating, if this were a movie I was taking in the least bit seriously. There is a strangely rushed feeling about proceedings (even in the modified version released on the DVD, with which the makers had more chance to play), exemplified by the way Yen’s character goes out with no bang at all. Yet despite obvious and undeniable flaws, this is more fun that expected, particularly for someone who has never seen an entire episode of the TV show – oh, look, they have Watchers too, just like Buffy…