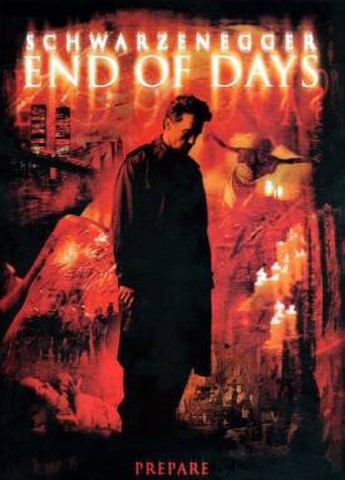 It’s Arnold! Wheeeee!! We love Arnold movies — we know exactly what to expect. At least I did. I think Peter Hyams should’ve gotten himself a different writer, only because his other film, The Relic, made sense. And for 100 million dollars, I think they could have got something that didn’t seem as though they tossed a hundred ideas into a hat, fished inside and pulled out a few, then ran with whatever came out. There was no symmetry to the plot, as if it were made up as they went along and just kept to the religion/Y2K hysteria theme for the cash-in. No in-depth characters: there was no way you could like them, because you knew absolute dick about them. It was a struggle to let you in on what was happening and I was irritated being left in the dark until it was in your face. Especially when that “in your face” turned out to be ridiculous. Not to mention the predictability factor: it was all very obvious, both to me and the few other people that actually stayed to finish watching it…

However as an Arnold movie, it was super. Tons of action, Predator-style, lots of good battles, gunfights, seriously good explosions and plenty of “Oh, I’m So Sures” in there. Gabriel Byrne’s piss is a killer… And of course, he was ultraviolent, lustful (watch for that sex scene with Udo Kier’s wife and daughter, you perverts!) and super powerful, except when he confronted Arnold. Then, for some reason, it turned stupid, like the old movies where the bad guy told the good guy everything that was happening, just so the good guy will have the edge in the end. And we all know it. It always happens. It reminded me so much of Dr. Evil that I had to laugh.

There were some fun moments, and the action was non-stop. As I said: Very Arnold, just what we expect. Only I really wanted a little more meat with my potatoes. I don’t know why, but lately I’ve been leaving the movies very hungry. But I guess you can’t really expect Citizen Kane. The main thing is that to go in there and enjoy yourself. Don’t try to understand it. Just embrace it for what it is: one of life’s simple pleasures. 🙂

[TC editor: this film feels almost like two movies joined at the hip, part Omen-like religious shenanigans, part Arnie running round shooting things, and the disparate halves never quite gel. Gabriel Byrne makes a fine satanic majesty; perhaps too convincing, as Arnie’s stubborn refusal to sell out seems mere wilful pigheadedness — I’d have been reaching for the rhesus-negative Biro. The rest of the supporting cast do their stuff in between Really Big Set-Pieces For Arnie, who is not exactly challenged by the material. Nor will you be. And seen from the safety of the year 2000, all the fuss over the end of 1999 seems rather dated now…]