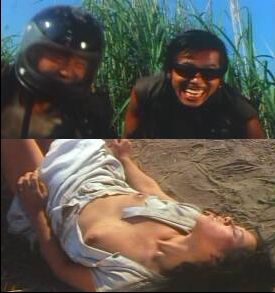 This isn’t an easy film to watch, in many ways. There are a number of scenes of sexual violence, both portrayed at length, and in a manner that manages to be both horribly realistic (in terms of brutality), yet with a subtext of apparent eroticism that will likely leave you feeling in need of a shower. The central characters are a trio of bikers, who form a very small gang; much like in A Clockwork Orange, their principal interests are rape, ultraviolence and, if not Beethoven, then perhaps prog-rock or even disco – this was made in 1978, after all. The “hero”, with quotes used advisedly, is Kawashima (Shinsui), who also acts as a father figure for his sister. This double life takes its toll, and when he prevents one of his friends from raping another young girl, tensions within the gang begin to mount…

The word “gratuitous” isn’t one you’ll often come across in the TC vocabulary, but honesty compells me to say this would be a much better films without the multiple sex scenes. After the first, they add little to proceedings, and if you find them a turn-on, you should probably get some therapy. Instead, they bring the picture to a grinding halt, which is something of a shame, since Kawashima is actually an interesting character, whose relationship to his sister is in marked contrast to his relationship to everyone else. If it’s certainly more depth than you’d expect from a 70’s porn flick, in the end, this doesn’t do nearly enough to escape its sexploitative roots.