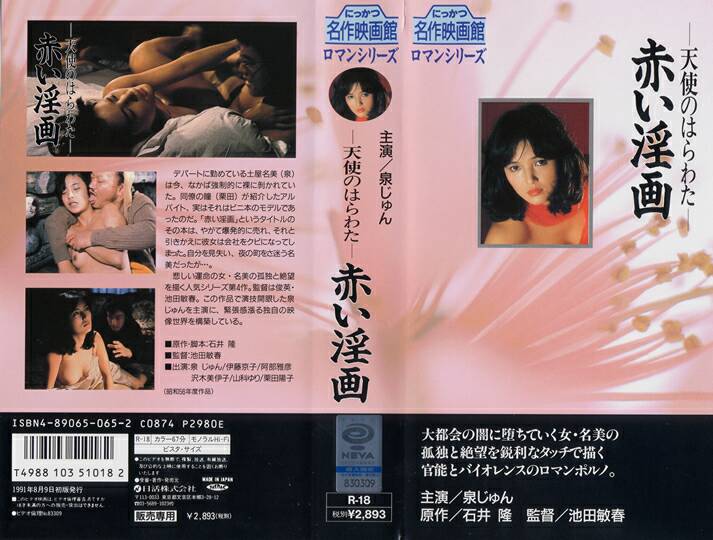 Indeed, Ishii’s manga inspired the Angel Guts series, all five films of which revolving around rape, and a girl called Nami – though modelled after Ishii’s wife, she is not the same character in each film, and the importance of her role varies markedly. Four different directors worked on the films, and the results are surprisingly varied, though the obviously missing viewpoint is a Japanese woman director’s take on the material – I doubt, somehow, Nikkatsu ever asked one…

Not sure I agree with Artsmagic’s contention that, “the Angel Guts series can now be seen as it was intended; a tribute to the courage of violated woman in a world of male violence” – the original art, shown top, and included as part of the DVD extras, suggests otherwise, especially alongside the tendency in Japan to eroticise non-consensual sex. But unarguably, they deal with rape and its consequences, in a forthright manner almost unheard of in English-language cinema. This is not perhaps a universally good thing, at least in the sense that these aren’t much “fun” to watch – Chris begged off the remainder of the series after the second, which is most unlike her.

This isn’t an easy film to watch, in many ways. There are a number of scenes of sexual violence, both portrayed at length, and in a manner that manages to be both horribly realistic (in terms of brutality), yet with a subtext of apparent eroticism that will likely leave you feeling in need of a shower. The central characters are a trio of bikers, who form a very small gang; much like in A Clockwork Orange, their principal interests are rape, ultraviolence and, if not Beethoven, then perhaps prog-rock or even disco – this was made in 1978, after all. The “hero”, with quotes used advisedly, is Kawashima (Shinsui), who also acts as a father figure for his sister. This double life takes its toll, and when he prevents one of his friends from raping another young girl, tensions within the gang begin to mount…

The word “gratuitous” isn’t one you’ll often come across in the TC vocabulary, but honesty compells me to say this would be a much better films without the multiple sex scenes. After the first, they add little to proceedings, and if you find them a turn-on, you should probably get some therapy. Instead, they bring the picture to a grinding halt, which is something of a shame, since Kawashima is actually an interesting character, whose relationship to his sister is in marked contrast to his relationship to everyone else. If it’s certainly more depth than you’d expect from a 70’s porn flick, in the end, this doesn’t do nearly enough to escape its sexploitative roots. 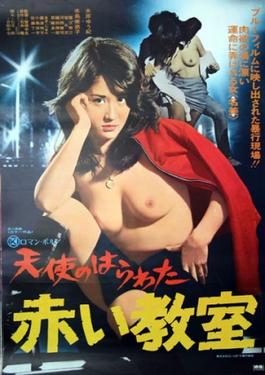 The second in the Angel Guts series is a good deal more successful than its predecessor in just about every way. If anything, there’s probably more sex in this, though at least most of it here is at least semi-consensual; the character of the rape victim here is given a lot more depth, rather than portrayed as a piece of meat and the devastating effects on her psyche are almost as hard to watch as any actual abuse. This is more thoughtful, right from the opening scene: at first, it looks like simply another rape, but as in Henry, Portrait of a Serial Killer, we’re actually watching a movie. This film-within-a-film calls into question the “reality” of the situation, and puts the viewer on a totally different footing.

After he sees this, a pornographer Muraki (Kanie) becomes entranced by the lead actress, Nami (Mizuhara). He tracks her down, only for her to say she was really raped – there’s no subjective proof for this, and it brings to mind the dubious claims of Linda Lovelace that she, too, was coerced. Still, “Rescuing” her becomes his obsession, in a way not dissimilar to Taxi Driver, for she also represents Muraki’s hopes for his own way out. It briefly looks like they can be each other’s escape, but circumstances dictate otherwise…

A lot of this is undeniably grim – not least the scene where you realise the whole downward spiral is about to begin again, with a new victim. But the movie also contains its share of black humour, not least in Muraki’s approach to his “art” and Nami’s spot of role-reversal, where she becomes the abuser rather than the abused. But the best thing about the film is its apparent honesty; obviously, I’ve never been raped, but I can only think of a couple of other films (Ms. 45) that do such a good job of capturing the shattering impact of such an assault. Classroom is also an unflattering, though sympathetic, portrayal of those in the porn industry and the burnout it causes, and overall, this is a good deal more forthright than 99% of adult entertainment even attempts. 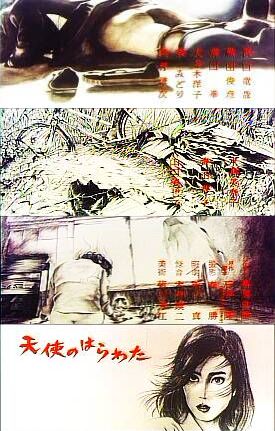 There’s an unfortunate degree of predictability here; by this stage in the Angel Gutsseries, we were beginning to get a pretty good handle on what to expect. Hence, when this one begins to unfold, with journalist Nami (Kanuma) researching a series of stories on “Rape and its Consequences”, it was immediately clear that she was going to end up with first-hand experience of her subject matter. It’s kinda hard to feel much sympathy, since she’s a gutter journalist of the highest order, doorstepping interview subjects and harassing them to the point of tears, or even beyond, while the masturbatory shower sequences keep dragging us back to “reality”, where this is a soft-porn flick rather than social comment.

There are some interesting asides to be had here, including the good use of sketches (presumably from Ishii’s original manga), and Nami’s relationship with another journalist, who looks like a Japanese version of the late, great Hunter S. Thompson, in sunglasses and fishing cap. He, too, has an interest in rape that goes beyond the normal, with a dark secret or two in his past, which leads Nami into peril. As a result, her sanity is seriously rattled, and our heroine is all but reduced to a gibbering wreck, with the line between reality and her dubious fantasies almost non-existent. But we’re never given much reason to care for her, and the net result is that both her plight, and the film in general, leave us almost entirely unmoved. 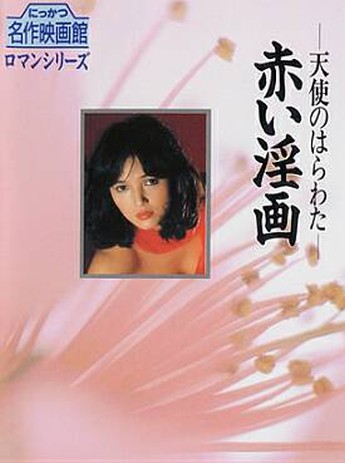 Certainly the most eye-catching title of the series, this incarnation of Nami lives in an apartment complex almost entirely populated by sexual deviants of one form or another. She’s not exempt, of course: after she ends up modelling for the titular magazine, she finds herself having to deal with a stalker. This is a short synopsis, but at only 64 minutes, it’s a short film, and a large chunk, percentage-wise, is spent on sexual hi-jinx. Though, at least initially, most are the solo kind – we even learn how a woman can masturbate using a raw egg and a fistful of pencils. Never say cinema can’t educate.

The most honest of the set about its intentions, it has nicely self-referential moments: “There are perverts everywhere nowadays,” mutters Nami at one point, and she might as well be talking through the screen to the audience. The moral here is, it’s harder to be who we are, than who people think we are. By the end, Nami prefers to fulfill people’s expectations, rather than go against them, but it ends somewhat hopefully. And art is on its side: not least, one wonderful moment where her stalker is being harassed by the apartment manager. The picture freezes, and we see an overlaid montage of him raping her. As an indictment of evil fantasy, it’s chillingly effective, and nicely contradicts another line from the film: “Pornography in Japan is totally tasteless, isn’t it?” 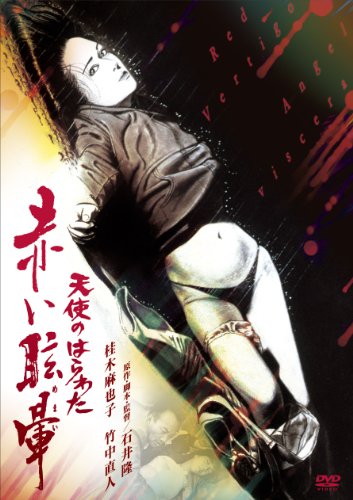 The best way to describe this is as a roman porno take on Last Tango in Paris. Two people, both desperately unhappy in their lives, literally collide, and find solace in ferocious physical couplings. Nami (Katsuragi, who was also in The Toxic Avenger, Part II!) is a nurse, whose husband is a “glamour” photographer; when she comes home early one day, after being attacked by a patient, she catching him boffing one of his models. She runs onto the street, and is knocked over by stockbroker Muraki, who’s just been caught embezzling funds. He abducts her, and thus begins a somewhat strange relationship between the two, where the power shifts between kidnapper and victim.

This was the first film ever directed by Ishii, so it seems logical to conclude that this is the closest to the spirit of his manga. Certainly, this is the strongest “Nami” in the series, who simply does not buckle under the multiple attempts to grind her down (she is, however, quite good at running away from them…). There is a lack of artistic pretence to the sex here that proves something of a double-edged sword. It provides a grounding in reality, but does leave things almost entirely unerotic; it’s more like watching the Discovery Channel than anything. As such, despite more depth and attention to character than you’d expect, this should be filed as an interesting failure.