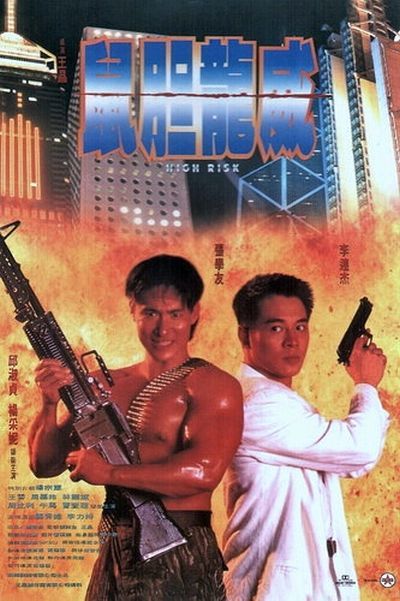 [TC 22] The Cantonese title may be approximately translated as “Mouse Courage Dragon Might”, which makes a good bit more sense when you know that, in Hong Kong, ‘Die Hard’ was called “Tiger Courage Dragon Might” for this is somewhere between a parody of, and a homage to, that film. Jacky Cheung plays Frankie Lane, an actor who relies on stand-in Jet Li to do the work. The pair, together with a nosey TV reporter (Chingmy Yau), are taken hostage in a skyscraper by a gang of jewel thieves – led by the guy who killed Li’s wife and child two years before. The first half is broad parody: Lane is famed for doing his own stunts, but is actually a fake, drunkard and lecher. Do you think Wong Jing was pissed at Jackie Chan or something? Eventually, however, even Lane becomes a hero when the second half kicks into full-on “Willis in vest” mode. Jet Li never gets to do much, surprisingly, leaving the final battle to Cheung, yet the end result is fast and fun – as long as you’re not a hardcore Chan fan…