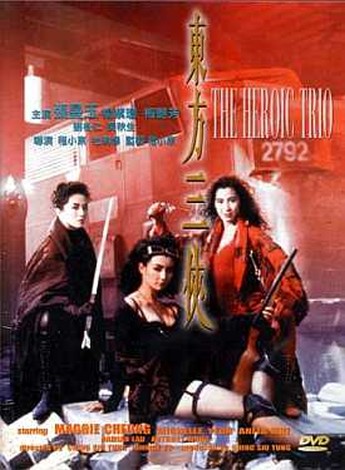 Every time I watch this, the same thing happens. In the first few minutes, I’m wondering why this film is one of my favorites; the acting is awful, the effects cheapjack and the entire concept utterly ludicrous. Yet, somehow, inevitably, it always wins me over completely. There’s a point where everything clicks and it all meshes into a delirious, dreamlike world where semi-demonic entities kidnap babies to lead their army, there’s a cloak that makes you invisible and you can fly through the air by tossing a few sticks of dynamite inside an oil-drum and sitting on it. That cartoon/comic-book mentality is what this film does, perhaps better than any other, and as noted in the original review, cranks up all the emotions to eleven.

I saw this the same day as Ghost Rider, which goes for the same style, but in comparison, totally blows the emotional aspects. The late, great Anita Mui anchors the cast magnificently, but Madames Cheung and Yeoh are by no means outclassed – the male members of the cast, on the other hand, pale by comparison, except for Anthony Wong as the evil henchmen who eats his own finger. [A scene, I believe, edited from the American DVD] Bonus points for the cinematography by Tom Lau and Poon Hang Sang and William Hu’s soundtrack. There’s no doubt that the film’s eyes are larger than its budget, particularly in the final battle, yet by that point, I have been totally sucked in. If said battle had been re-enacted with Barbie dolls, intercut with stick figure drawings, it probably wouldn’t have bothered me. Such is the power of the cinematic illusion weaved here. 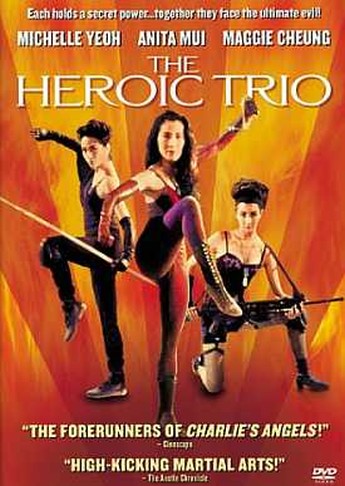 [Original review] It’s interesting to contrast this one’s approach to Flying Dagger; where that relentlessly took the mickey, Heroic Trio plays the ludicrous central concepts absolutely straight, and draws the viewer along with it. This is about the nearest you’ll see to a chick flick in my top 50: there’s babies, true love, much female bonding and terminal illness. Admittedly, there are also huge slabs of kick-ass action, and three of Hong Kong’s top babes (Mui, Cheung, Yeoh), so this is truly a film the whole family can enjoy.

Mui plays Wonder Woman, a superheroine investigating the systematic kidnap of babies who finds out childhood friend Yeoh is involved, and is using her boyfriend’s invention, a cloak of invisibility. To confuse matters, bounty hunter Cheung is also on the case, though as the title suggests, all three team up to defeat a truly evil villain(ess?) in his (her?) underground lair. This is melodrama par excellence, with every emotion cranked up, like Spinal Tap, to eleven. Yet it’s all utterly convincing, thanks to perfectly pitched performances from the three leads, and the net result is the finest ‘girls-with-guns’ flick to come out of Hong Kong. A