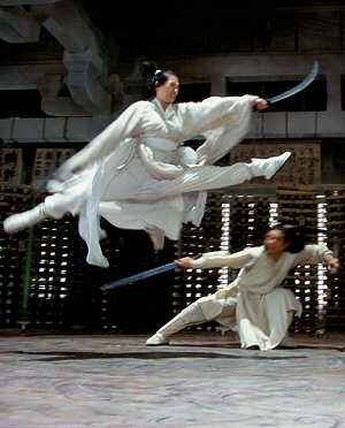 I can imagine Zhang frothing at the mouth after seeing Crouching Tiger: “Dammit, I’m gonna show that Ang Lee tosser he’s not the only arthouse dude who can make a chop-socky flick!” Er, well, perhaps not, but the echoes are definitely there – literally, since Zhang used Tan Dun to write his score too. So CTHD definitely wins for originality; time for them to go head-to-head elsewhere:

Hero is up for Best Foreign Film Oscar tonight; its chances likely hinge on the memory spans of Academy members (CTHD having won in 2001). Overall, your preference may be for whichever you saw first; for most, including us, that’d be Dragon, and we have to give it the nod. Even on its own terms though, Hero still demands to be seen on the big screen – something currently scheduled in the United States for November 2003. The queue starts here.