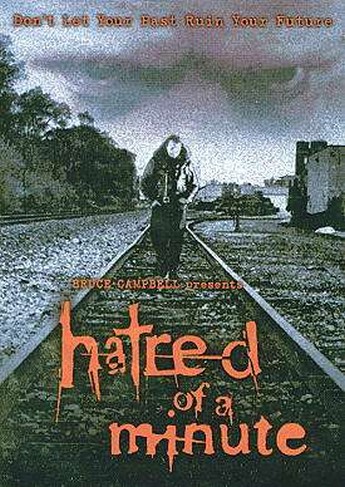 Eric (Kallio) transcribes autopsy reports for a living, is writing a screenplay, and is haunted by memories of an abusive childhood (provided by father Hansen, showing why he’s hardly worked since Texas Chainsaw Massacre). He has a devil on one shoulder, an angel on the other, and they’re fighting for his soul. The torment finally pushes Eric into killing women to “free” them from their troubles, and his friend Glenn – who just happens to be a local homicide detective, what are the odds against that? – is investigating the murders.

Strike one: it took 9 years for this labour of love to appear – usually, there’s a reason no-one picks these up. Strike two: Bruce Campbell’s appearance is limited to soap opera footage seen on TV. And for strike three, Kallio not only directed and starred in this, he wrote it and did most of the editing. Remember the old saw about “jack of all trades, master of none”? I don’t care who you are, every film-maker needs someone to restrain their self-indulgence. [Unless you’re Quentin Tarantino, when several hundred people, a strait-jacket and a pallet of Prozac are apparently required.]

There are interesting ideas, it’s just that the potential is unexploited. The angel and demon don’t really interact, and the relevance of Eric’s writing is unexplored. Even the title is inaccurate: what Eric embodies is the hatred of a lifetime, not a minute. Despite this, and a lame performance from Kallio the actor, Kallio the director has an effective grasp of imagery, and Kallio the writer knows about pacing, so you won’t find your attention drifting off. If he doesn’t try to be a one-man band, a future career is not impossible.