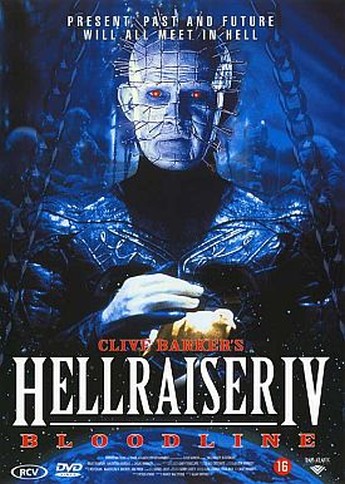 Known, fairly disparagingly, as “Pinhead in Space,” this isn’t quite as bad as you might think from that. Yeah, it’s a bit of a mess, trying to throw together three stories from disparate eras, past, present and future, but you can see what it’s trying to do: create a mythology which spans the centuries. It centres on Paul Merchant (Ramsay, who also plays his ancestors), who has built a space-station in the year 2127, with the aim of… Well, let’s get to that. As his robot solves the Lament Configuration, the station is raided by soldiers under the unfortunately-named Rimmer (Harnos), who arrests Merchant. He tells her the story of what he’s trying to accomplish, and how it dates back 400 years, to when French toymaker Philip L’Merchant made the first hellish puzzle-box, from a pattern provided by a French noble.

Two centuries later, John Merchant is an architect in New York, and to cut a long story short, more Cenobiting ensues there, with Pinhead wanting to open a permanent gateway between Hell and our world. Now, a third generation of Merchants is ready to confront Pinhead. Hopefully, this battle will go a bit better than the first two, but first, he has to convince Rimmer he’s not insane. The fact that Pinhead and his crew are slicing and dicing the rest of the troop does help in this area.

There are large chunks of this that don’t make much sense [how, exactly, does Merchant get to build a space station to his own, highly-illogical design?), but the Hellraiser series has never really been about logic, as much as generating a nightmarish universe where a lot of really bad shit happens. The film isn’t bad at that, though they would probably have been better to concentrate on one story – it seems to imply confidence in its script that it needs to throw multiple threads at the viewer. “What, don’t like this one? Well, there’ll be another along in a moment.” The depiction of pre-revolutionary France is hardly convincing, though a sense of location has never been important either.

Ramsay is functional in his multiple roles; Vargas does make quite a good impact as Cenobite Angelique, and of course, Bradley is good value as ever, spitting out complete bollocks like, “Ahaha! Oh, you suffer beautifully. But I am here for business, not pleasure,” and giving them a resonance that’s poetic beyond their actual merits. The net results, a last hurrah both theatrically and for any involvement from Clive Barker, are something of a step up from the largely-dire third installment, though we’re still a long way from the delights of the first couple.