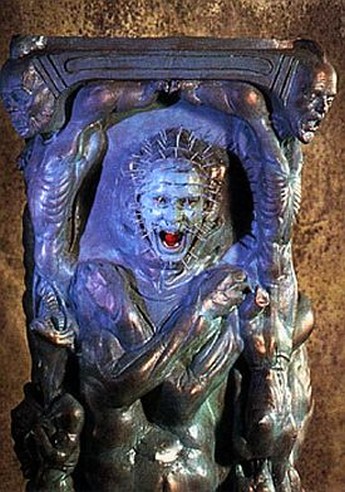 I recall hating this when I first saw it. Now, not so much, though it would still be a huge stretch to call it good. The movie abandons any pretensions at a non-American setting, moving wholeheartedly to New York, where nightclub owner JP Monroe (Bernhardt) has picked up an interesting pillar for his apartment. When his blood is spilled on it, that awakens Pinhead (Bradley) from his imprisonment within, and he entices JP into getting enough victims for Pinhead to break out into the mortal world. Meanwhile, TV journalist Joey Summerskill (Farrell) is investigating the club, after seeing a guy torn apart by chains at a local hospital – turns out he’d half-inched the Lament Configuration. Her dreams are visited by Pinhead, or at least his pre-Cenobite human form, who enlists her help to make sure the pointy one is not allowed to ramble among us. Pinhead replaces his stock of henchmen, mostly from the bar-crowd, and battle is joined.

The shift in focus from the humans to Pinhead is understandable, particularly since none of the former are written as to be likeable or even particularly interesting. While Bradley delivers a nice double-turn, playing both the villain and the closest thing the film has to a hero – I particularly liked his blasphemous humour – the “new” Cenobites he creates are… Well, a bit crap, to be honest. I mean, a guy with CDs stuck in his face? Not quite the new face of horror, really. The other main problem is, it is painfully obvious how this is going to end: Kirsty Joey fiddling with the box, before she finally figures out how to open it, just in time to send Pinhead back to hell. It barely passed muster once as a finale, and twice was pushing it; the third time is definitely not the charm. Even the effects are less impressive here than previously, a combination of a sharply-reduced budget and an apparent lack of imagination. Having Pinhead and his cronies stalking the streets of New York may have made sense at the time, perhaps, but the execution leaves a good bit to be desired.