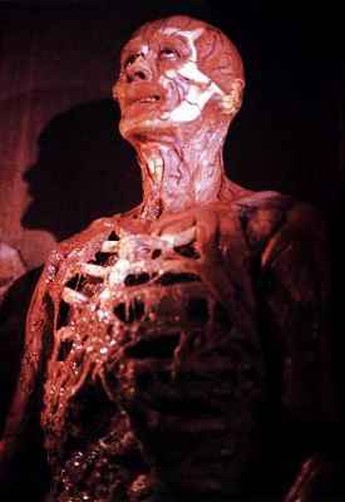 Wow. Doesn’t seem like 22 years ago that this came out, but September 1987 it was. Barker’s still retains much of its ability to shock, though some of the most horrific imagery it contains is probably the eighties hairstyles. But there is a genuine sense of depravity, and in Pinhead, we have one of the most memorable creations in the genre’s history. If the film has a weakness, it’s likely the story, which doesn’t make much sense. Larry (Robinson) and Julia (Higgins) move in to his old family home; an accident causes his blood to spill in the attic, partially resurrecting his brother, and her former lover, Frank (Sean), from where he has been trapped.

More blood – from victims supplied by Julia – bring him almost to normality. However, daughter Kirsty (Laurence) finds out what’s going on and, through solving the Lament Configuration puzzle-box, draws the attention of the demonic Cenobites. To escape, she offers them Frank: however, bargaining with such creatures is not exactly recommended.

Watching the movie does give you some idea why Stephen King chose to say, “I have seen the future of horror, his name is Clive Barker,” even if Barker’s subsequent work largely made the statement a false prophecy of monumental proportions, Two aspects that work really well are Bob Keen’s excellent physical effects and Higgins’ performance. The former has a gloopy presence that CGI, even now, can not hope to match, especially when skinless Frank comes back to life. And Higgins is a far better actress than is usually found in this kind of thing; she has a steely maturity that makes you wonder why horror films spend so much time on teenagers.