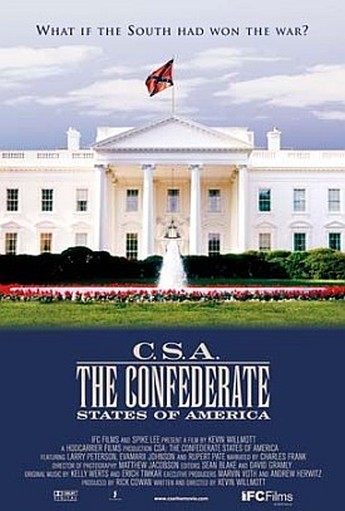 The concept of “What if?” history is something I find fascinating – how history can turn on something apparently trivial. For example, what if the security guard in the Watergate building hadn’t been as rigorous in checking the doors? Here, it’s what if the South had received the foreign help they asked for, and went on to win the American Civil War? From here, Wilmott puts together an alternate timeline, in which Lincoln is sent into exile, the United States takes over most of South America, and then remains neutral against Germany in World War II, though still fights Japan. The result is a modern America where slavery is still part of everyday life.

This is supposedly a British documentary, being screened on a San Francisco TV channel, so is intercut with adverts, for products both real [Sambo axle-grease] and fictitious [The Shackle, a GPS device for your slaves]. These work much more effectively than the historical re-creation, which are a clumsy mix of stock footage and re-enactments, that resemble a poor History Channel documentary more than anything. Particularly bad are “clips” from fictitious plays and movies; pointless, except to make me wonder if Transformers will be used in fifty years in a similar way? I trust not. Occasionally interesting, it’s too often clear that the makers have their own agenda, and are using the film to promote that, rather than in a neutral or historical perspective. The central idea is certainly thought-provoking; unfortunately, the movie never convinced me that the route it takes is plausible.