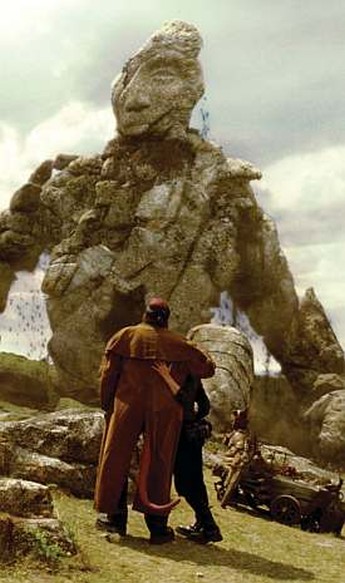 The second go-around definitely works better than the original, with the characters meshing into what feels much more like an organic whole, while Goss’s Elvish Prince Nuada – and the immortal mechanical soldiers of the title he seeks to control – certainly prove a match for Hellboy (Perlman). There’s a whole, almost Tolkeinesque mythology built by Del Toro, providing the backstory if a war, that ended in a truce where we humans got the cities, and the countryside was left to the other creatures. However, our continual encroachment has pushed Nuada over the edge, and he now feels it’s time to take up arms again, re-assembling the three pieces of the crown which would allow him to control the Golden Army.

He gets two pieces, but the third is held by his sister Nuala (Anna Walton), who refuses to hand it over, and seeks protection from Hellboy, his pyrokinetic girlfriend Liz (Blair) and fishman Abe (Jones), who begins to have feelings for Nuala. This brings down the wrath of Nuada, who will let nothing and no-one, not even his own sister, stand between him and his goal. Right from the opening prologue, beautifully giving the history of the conflict in a style which feels like puppetry, it’s clear that this is confident film-making. Del Toro is a lot more at ease with the characters, and this comes across in their relationship, which is a lot more fun to watch. The supporting cast are a lot more fully-developed, in particular Abe, who is now the brains of the outfit. It combines Men in Black with Lord of the Rings – not a combination you’d think would be possible to pull off.

But it works, right from the early scene where Abe leads their boss through the complex, with all manner of…things going on in the background, which Abe airly explains away with the line, “Oh, it’s Friday.” Then there’s the lovely sequence where Abe and Hellboy get drunk and start singing along with Barry Manilow. Yet none of this overshadows the fantasy and action elements, such as the battle in New York against a massive forest elemental, or the hordes of flesh-eating “tooth fairies.” The end result is something which succeeds just as much as a work of fertile imagination, as on the character level, and is rarely short of a huge pleasure to watch.