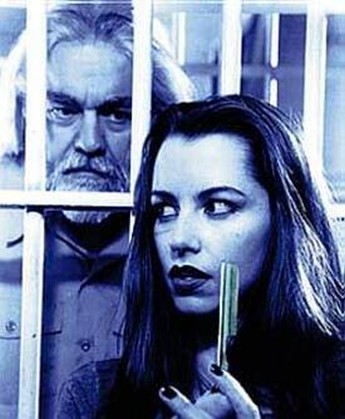 This low-budget anthology from Troma has Rochon as a death-row inmate, telling three stories to guard Hansen. The good news is, while most anthologies are wildly variable, this one is consistent. The bad news is, it’s consistently mediocre: bad execution (forgivable, on a low budget) and limited imagination. The first tale is “vengeance from beyond the grave”, after a mother drowns her two kids; the second plays like a Jerry Springer ep, with a white-trash woman going to a local sorcerer to help extract revenge on her abusive husband; the third (and best, or least worst, anyway) has a motorcycle-gang visiting a shrine to a legendary dead biker, whom they believe still protects them.

Hansen is, of course, legendary for his role as Leatherface in the original Texas Chainsaw. Let’s say, this won’t displace it; Rochon overacts about as much as Gunner underacts, so they kinda cancel each other out. There’s not much to speak of beyond these two as far as ability: the characters here are, probably intentionally, never more than shallow stereotypes. Things are hampered by amazingly poor FX, particularly masks – it’s as if the film was produced using November leftovers from a discount Halloween store. There are odd moments of wit, showing how it might have gone with more thought to the script, and if you’re good at managing expectation, it’s still just about watchable… albeit only once.